Halloween came much earlier than i expected it to come this year. A month ago, i went off course while on an ATV in Bintan and took a lot of stitches to my left arm. You can read the post here, alongside gory photos of my half mutilated arm and a lot of blood. Yes, real blood, not the kind you use as a prop for Halloween.

I'm not going to be blogging about my injury this time. It has pretty much healed almost completely, except that i have this partial numbness on my left arm and little finger. Am going to see a specialist next week so am keeping my fingers crossed but since medical science is now so advanced, so i am not that worried.

The past month has been a living hell, even though i have been on medical leave. Having to change my dressing everyday for two weeks wasn't a joke, and then subsequently, i still have to change it every alternate day. Imagine having to go to the hospital or clinic everyday, having to face sick people when you are not "sick".

This brings me to the point of my post, about Angsana Bintan, which is part of a very well renowned company, Banyan Tree Hotels and Resorts. I've received many questions on Formspring, Twitter, as well as many of my friends about what Angsana Bintan has done to follow up with this incident. I'm telling you now, officially, NOTHING. Why official? Because even if they were to come back to me with some sort of explanation right now, i wouldn't be interested in hearing them out. I can already imagine how many people will be able to read this entry just buy typing "Angsana Bintan" on Google.

I'll leave out the unimportant details and go directly to what i think is most important. The trip to Angsana Bintan was sponsored by a hotel booking company. This means Angsana Bintan did not pay for the room nights at all, they merely offered us activities. 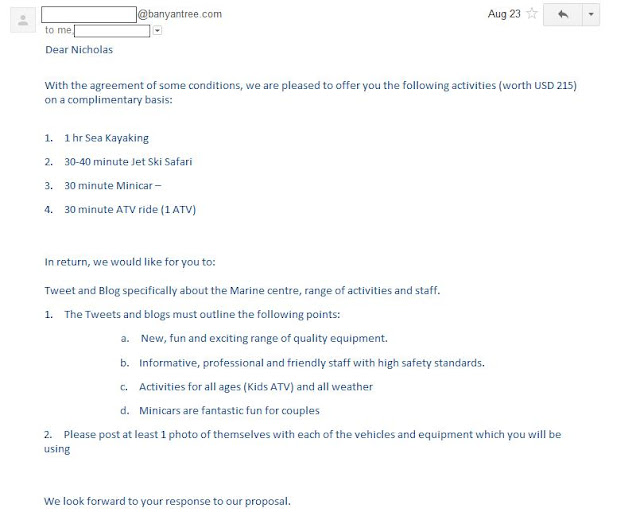 In return, they wanted us to blog and tweet about how "amazing" their activities are. If you look at the image above, you will see a point where they highlighted, "informative, professional and friendly staff with high safety standard".

"Informative" - Staff told me i could go on the ATV despite knowing the track was muddy because it has just rained.

"Professional" - Nearest hospital to the resort was about an hour drive away. The ambulance took 40 minutes to get to me at the resort and i spent almost 4 hours after the incident losing bags and bags of blood before i was transported to the hospital.

I would like to further elaborate a few points as well. I was not given a full set of body gear during my ATV ride when they clearly showed a banner of a guy with full body gear on an ATV in their resort lobby. Also, their clinic doctor was beyond lousy, she spent more than an hour on me trying to stitch me up and told me after more than an hour that she needed to send me to the hospital as she could not do the job. This also explains the 4 hour delay.

Dear Angsana Bintan, what safety standards are you talking about here? I'm really glad that i took those stitches instead of blindly tweeting and blogging about how "safe" their activities are and risk someone getting injured or even killed by their inferior safety standards put in place. For your info, if you search up the internet, there has been many cases of people being killed while on an ATV.

We checked out the next day, and Angsana Bintan wanted to bill me USD500 for all the medical fees and charges. 12 hours ago i was on their ATV, i took about 40 stitches to my left arm, and they want to bill me for medical -  goes to say a lot about them. I told them to bill me a bill in Singapore (which they never did) because i wanted a clear breakdown of what i was paying for (they didn't explain).

Back in Singapore, their PR person who liaised with me about the activities (based in the Singapore office) did not even bother to ring me up to ask about the incident. Instead, all she did was send me a pathetic email saying their GM at Angsana Bintan will investigate the matter and get back to me. How sincere can one be when they choose to send an email over picking up the phone to dial eight numbers? To think she is the Regional Director of Banyan Tree, i suppose she clearly does her work as well as Amy Cheong.

Last week (about 3 weeks after the incident), their GM from Angsana Bintan rang me up. He asked if i was well and told me he has settled the broken window pane (some villager's house window i smashed into). And adding on to this, i want to mention that the GM was not at the scene when i was bleeding profusely in the resort's clinic, instead he said he had to settle the broken window pane and please the villagers. At that point i felt like my life was worth lesser than a broken window. Dear villagers in Bintan, glass panes are cheap in Singapore, shall i send you some via courier?

It has a month the whole incident happened and i have sent two emails to their PR in Bintan, but clearly she isn't interested to reply me regarding this whole issue. It shows a lot about professionalism on their part and i am very disgusted about how they are taking the "let's just forget this thing and let it fade" approach towards this whole issue. It's pretty clear that they are trying to avoid this whole issue instead of addressing it - public relations does not teach you to do that.

I'm sure after reading this post, they have gotten their "publicity". Just so you know, i am never going back to Angsana Bintan after this whole incident. And if anyone wants to, no one is stopping you. Just take my advice, soak yourself in the pool and skip the activities. That is because if you get injured, it is most probably going to be nasty, and prior to that, no one is going to care - that is Angsana Bintan and their management for you.
Posted by Nicholas Zayden Tan