If the news hasn't reached you by now, the MDA (Media Development Authority) banned "Sex.Violence.FamilyValues" just a day after the film's premiere. Why, you ask? Due to racial references which are demeaning and offensive to Indians. What irony. 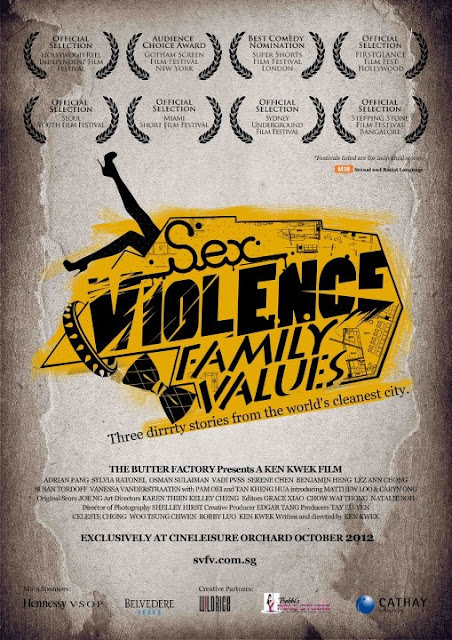 I studied Mass Communication in tertiary and i fully understand what MDA does (reviews films and give them ratings before they are screened to the public), but i didn't understand one thing - why was the film given a rating (M18) and then taken back. To me, it makes MDA look stupid, by giving a rating, and then taking it back. If they felt that it shouldn't have been screened at all, then they should never have given a rating from the beginning.

But let me just try to link some stuff that i think actually makes some sense, the movie was banned and released to the a day after Amy Cheong made racist remarks about the Malay community in Singapore. To side track a bit, if you do not know by now, Amy Cheong made headlines after publishing a Facebook post on 7 October 2012, making unethical racist remarks about Malays. She was later fired by the National Trade Union Congress for making those remarks the next day, 8 October 2012. This also happened to be the same day MDA took back its rating on the film. Coincidence much you tell me?

Fair enough, Amy Cheong did get the whole Singapore talking and discussing about how racist remarks should not be tolerated in this society. But because of an imbecile loose mouth (or fingers in this case because it was a Facebook post) like her, which i strongly believe affected MDA's decision, they decided to revoke a film that many Singaporeans could potentially enjoy? That a Singaporean film maker put effort into making? I don't think it makes any sense.

For your info, "Sex.Violence.FamilyValues" is a film directed by Singaporean filmmaker Ken Kwek. Or how about i tell MDA now how they are not being supportive about our own people? It also stars Adrian Pang, which i really like watching on screen and on television. People don't watch films and go "why is he racist?". They laugh and forget about it the minute the next thing catches their attention. Dear MDA, we are living in the 21st century, not everyone has that mentality that all racist remarks should be taken personally. And no, there is only ONE Amy Cheong.
Posted by Nicholas Zayden Tan