The Marmalade Pantry - i have been to their other restaurant at Ion Orchard, but we were excited because we were going to The Stables this time instead. It's a long drive in, just in case you intend to go there and have no transport. Not to mention to humps on the way in that i feel can potentially spoil your car's suspension, especially if you are driving a car that is low. I think it's almost impossible to walk in.

The place was empty for a weekday (i reckon because of the location), we were among the first to arrive for dinner, but a few other tables were later occupied. I would say it's a totally different dining experience as compared to the other at Ion Orchard, where you have to place a reservation or wait at least half an hour if you intend to walk-in. 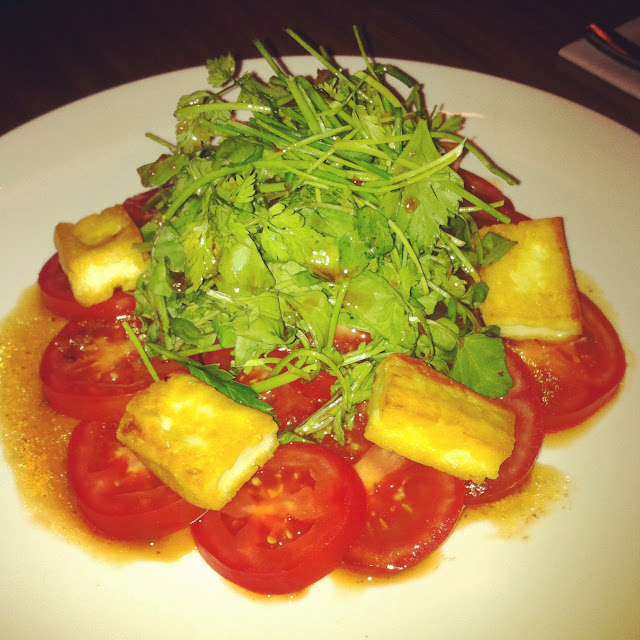 We started with appetizers and this Pan Seared Haloumi was definitely a clear winner. Apart from the fact it looks like the chef lazily threw a load of watercress onto the dish, which could possibly turn someone who does not like vegetable off. The tomatoes were soaked in the goodness of the dressing, which was almost perfection accompanied by the haloumi, which we mistakenly thought was bean curd. 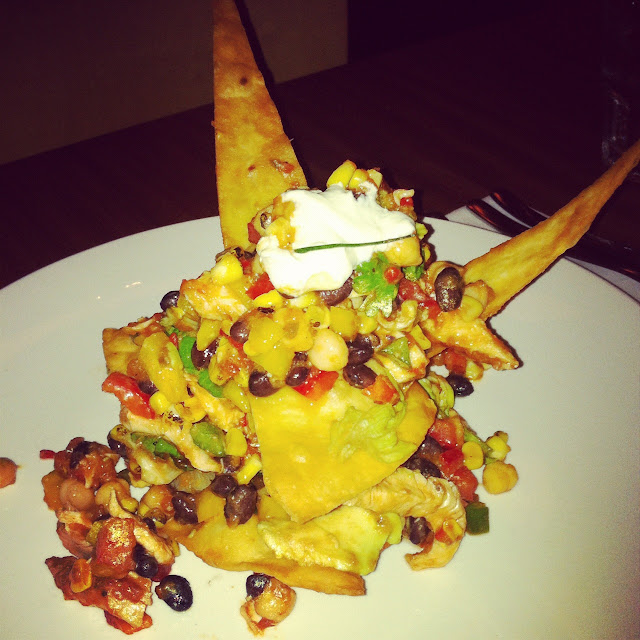 Jumping on to the Mexican Chicken Salad next, which i also recommend (to share), reason being the appetizers' portions were bigger than usual. I would have this as a main course if i was eating it alone. With chunks of chicken, corns and beans, it was a refreshing combination. For people who do not like seeing leaves on your salad, this is a good choice. 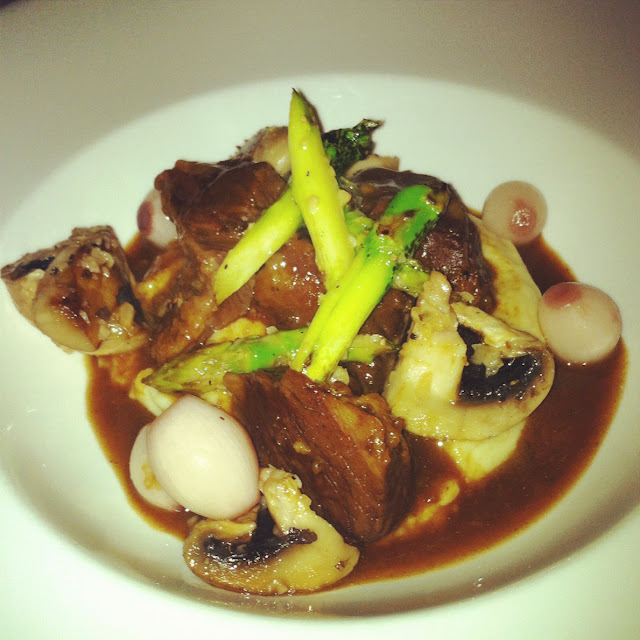 Moving on to the main courses, the Braised 120 Days Grain Fed Beef Cheeks didn't exactly make the mark. The pearl onions were served cold (not sure if it was meant to be that way) and the beef cheeks wasn't as flavorful as i thought they would have been. 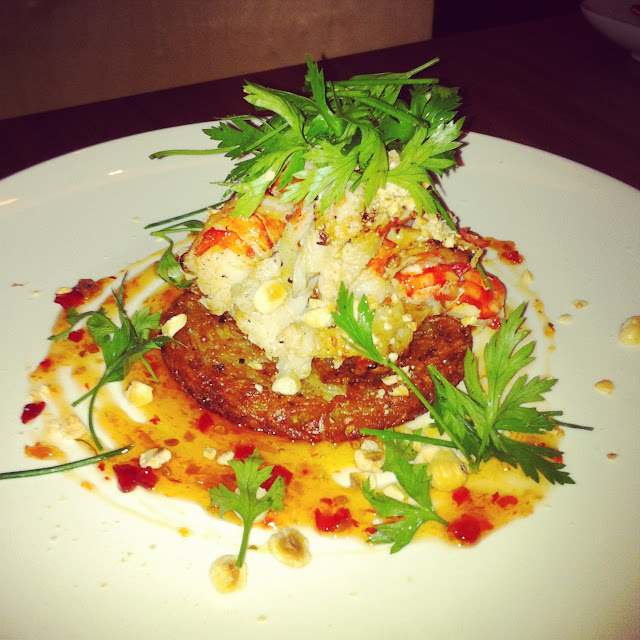 The Hazelnut King Prawns however, made up for it. I wish the prawns were grilled/cooked with the shell intact so they come out juicier. The pancake below, which i think is actually just rosti (am referring to Jessica's blog right now) was a good combination with the sweet chili sauce. 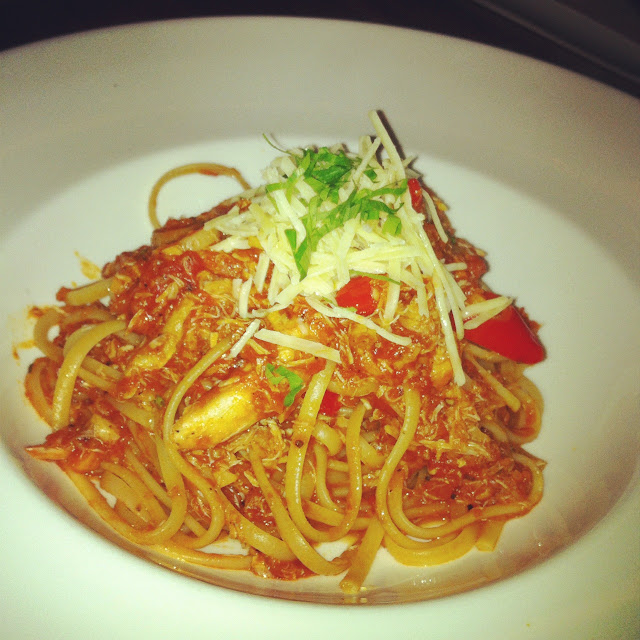 The Crabmeat Linguine, that is always raved about by food bloggers and on food review sites is a must try in my opinion. The girls preferred it with the pine nuts off but I'm not fussy with food so either way the dish still works. Another to try on their menu is also the Truffled Field Mushroom Risotto, which i like but we didn't order it because we clearly needed to save space for dessert and other stuff we have not tried before. 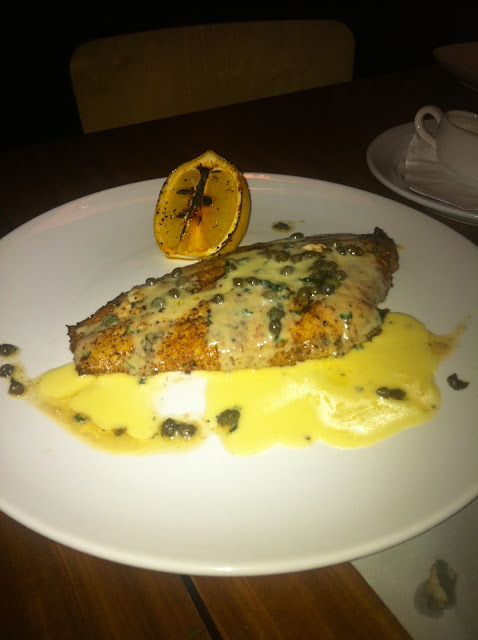 This was an impromptu order i just had to make. I don't normally remember prices of stuff but i remember this very clearly to be more than 40 dollars. I was expecting fish, but not literally just fish. So when the dish was placed on the table, i was a bit shocked (and i believe so was Jessica). I wouldn't pay that money for a piece of fish served to be me like that, and no there is no gold dust in the sauce of that fish. The taste however, was good and the fish was fresh. 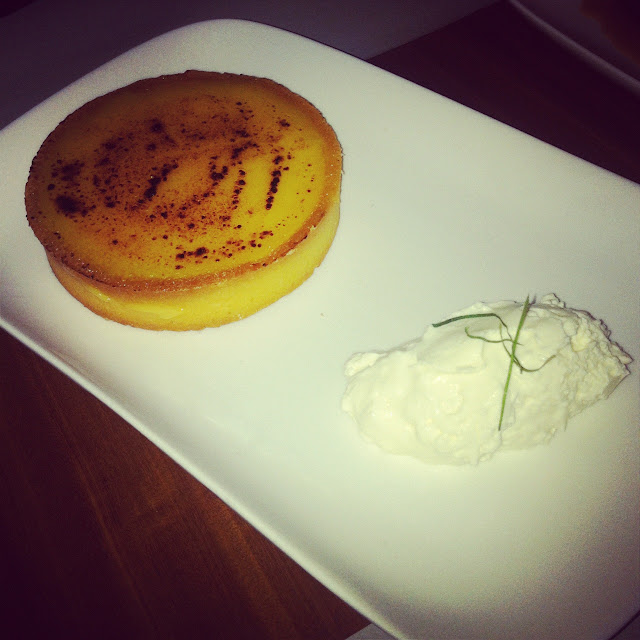 By the time dessert was served, we were already full to the brim. I didn't fancy the Lemon Brulee Tart as much as the girls did, probably because i like things either savoury or sweet and this came off as a bit too sour for me. 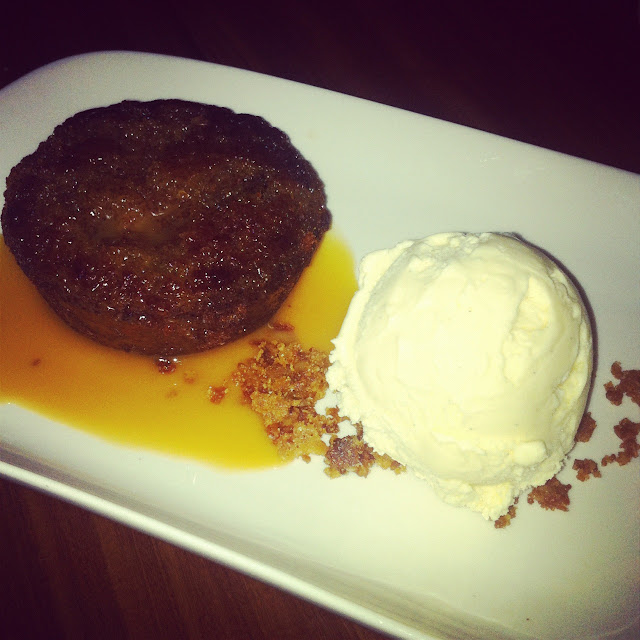 I wiped the Sticky Date Pudding off the plate though, which i must admit was good enough to convince me i had space for it in the stomach.

If transport isn't an issue, i'll pick The Stables anytime compared to Ion Orchard. And even if it is, the staff can help you to call for a cab when you are done with your meal. I like how the place is quiet and away from the city, which will allow you to have a proper conversation without having to worry about the background noise.