There is nothing better than good food at good location. Among the buildings at Gillman Barracks, you'll spot one colonial looking building - Masons. This restaurant offers seating both indoor, as well as al fresco dining, just in case you don't get enough of the "colonial feel" from the architecture. 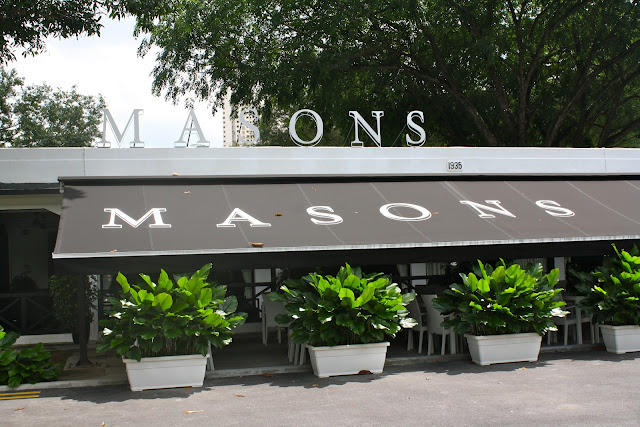 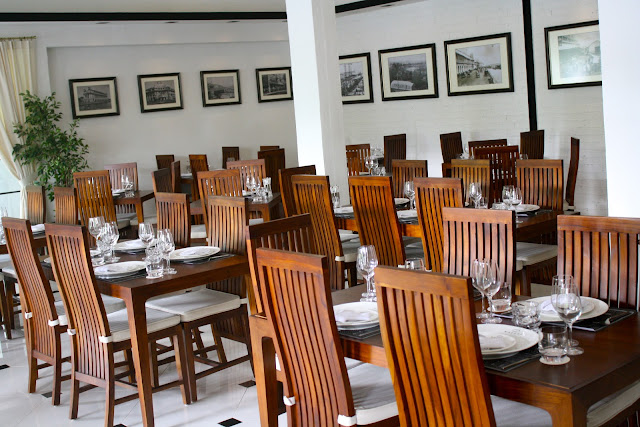 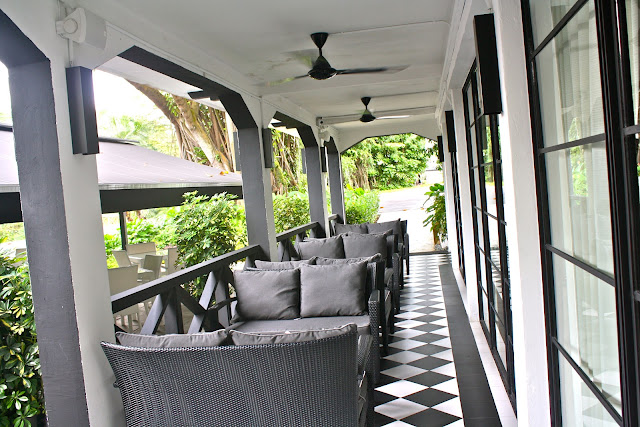 Helmed by Executive Chef Ratha Krishnan, Masons serves up French food with a slight Singaporean twist (which i believe is tweaked to suit the Singaporean palate). They open during lunch, as well as dinner. I would recommend to make reservations, just so you do not end up disappointed.

Some of you many have known him since he was at The Black Sheep Cafe. Having worked at the very prestigious Raffles Hotel, as well as many renowned restaurants in town, he jokingly told me he could cook up fried rice at the age of 8 for his siblings. Specializing in French food, he whips up one of the best duck confit (which he still serves at Masons), as well as souffle. A very humble man, who strongly believes an Executive Chef should always be involved in what is going on in the kitchen, instead of just giving instructions, which is also a reason why there was nothing to doubt about Masons when i knew he was heading it. 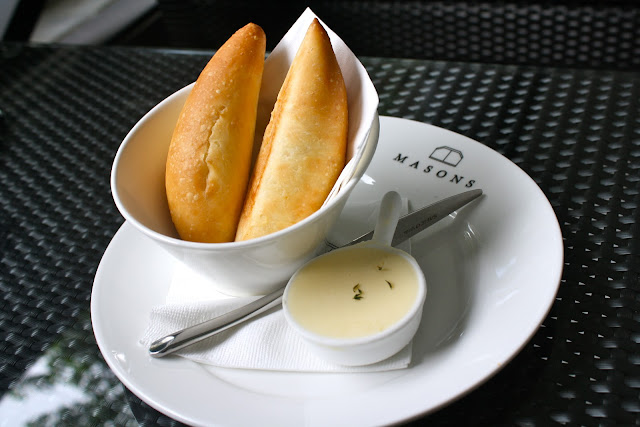 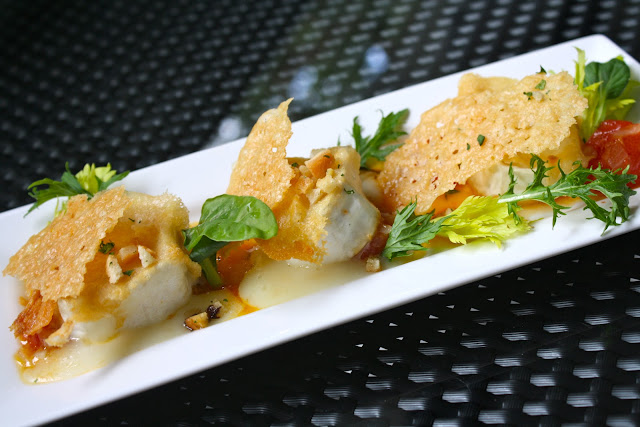 Just like most French places, they serve you bread, alongside a generous amount of butter. I had the Grilled Goats' Cheese for a starter. I am normally not a fan of goats' cheese because i find the taste very acquired. However, i enjoyed this one and didn't find the "smell" overpowering. The portion was generous (i recommend this to share) and the cheese was molten and flowy. Topped with parmesan crisps, grilled tomatoes and celery leaves, the smell of the cheese was almost non-existent when eaten with the other stuff and went well paired with the bread. 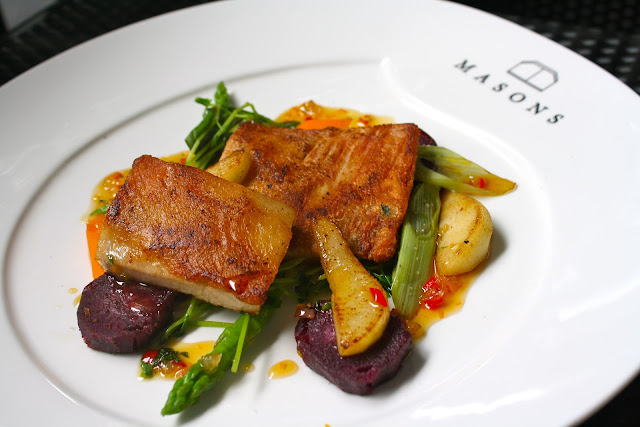 Because having a steak or duck confit is too mainstream (that does not mean it is not good), the Crispy Pork Cheeks sounded like a better option. Served with roasted pear, greens like asparagus and purple sweet potato, the star of the dish at the end of the day was still the pork cheeks, which was done to perfection - so much to the extent i didn't need a knife. Besides the crispy layer on the top, a tug and a pull with a fork and the meat came apart effortlessly. I especially liked the sauce that went with the dish, which tasted a bit citrusy. 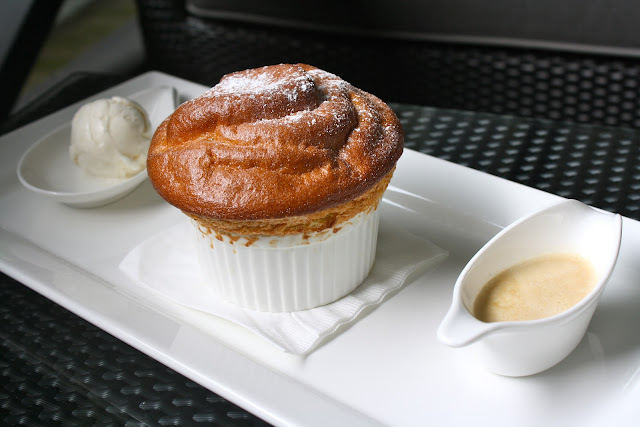 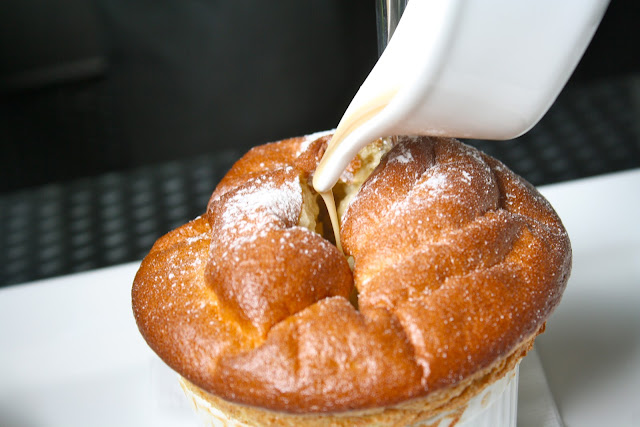 There is no proper ending to a French meal without a souffle. The flavors of the souffle at Masons are seasonal (if that is even the correct terminology to be used). Chef Ratha makes one of the best (or i say perfect) souffles in town, and this time it was no different. The Kahlua Souffle was the served at the perfect temperature, with a golden crown and soft, yielding middle. It was served with their own vanilla gelato (which had bits of vanilla pod traces in it), and was a perfect finish to the whole meal. In case you do not take alcohol (or do not like Kahlua), you'll be glad to know that you can also request for a Plain Souffle with Creme de Cassis, which i am sure will turn out equally amazing.

In all, Masons serves up delectable French food for reasonable prices. Also, there is ample of parking space (free parking) just outside the restaurant, which also solves the problem for you if you are driving. They currently serve up festive lunch sets starting from SGD 38++, and on normal days serve up lunch sets starting from SGD 28++. Just in case you are still thinking about where to go for lunch (or dinner), or even a place this festive season, you'll be glad to know you don't have to wrack your brains any further.