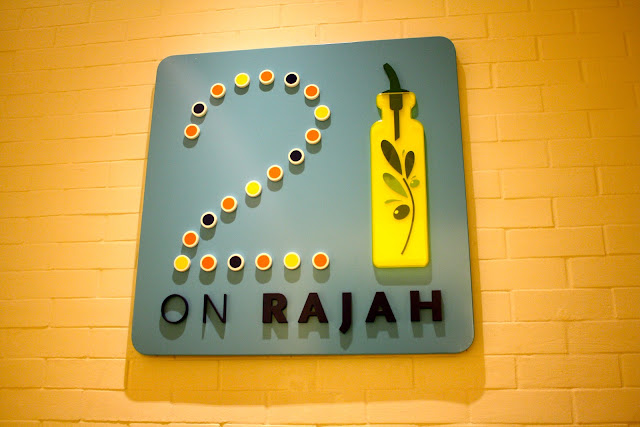 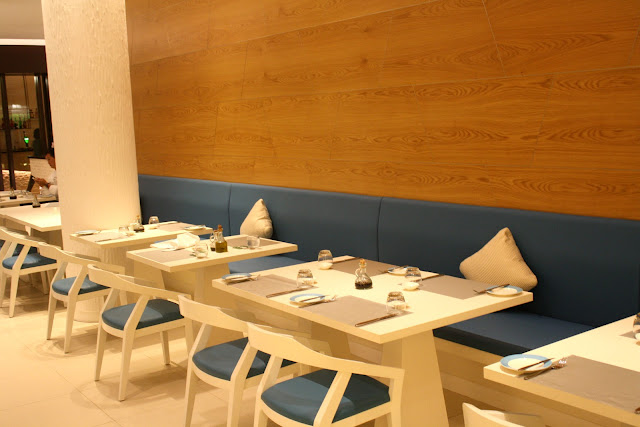 The number 21 from their name represents the 21 Mediterranean countries, which is also where most of their inspiration comes from to create their dishes. The decor of white and blue also resembles the theme of the restaurant, which i thought to be simple and minimalistic. 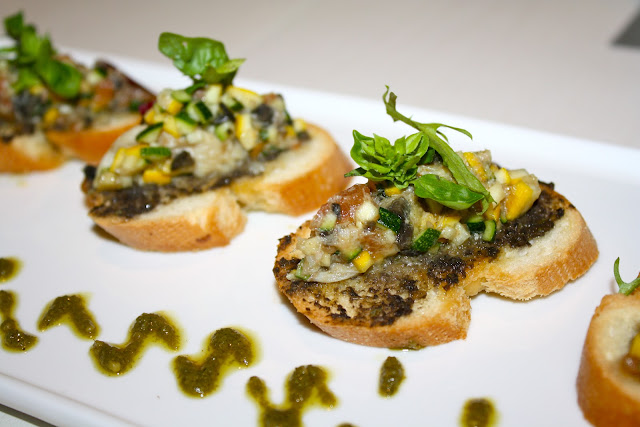 We were off to a pleasant start with the Crostini of Smoked Eel. The toasted crostini went well with the  smoked eel and zucchini and were addictive because they fit into your mouth perfectly. 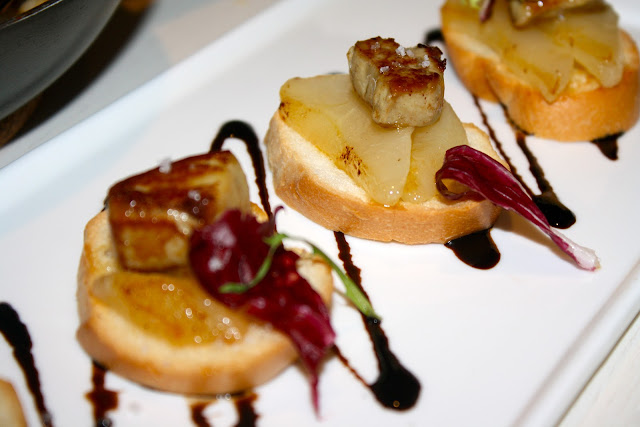 The Foie Gras with Pear was also surprisingly good. I would have however preferred the portion of the foie gras to be a little bigger because the sweetness from the caramelized pear flavor overpowered the foie gras, which also defeats the purpose since anyone having this would probably be a foie gras fan. 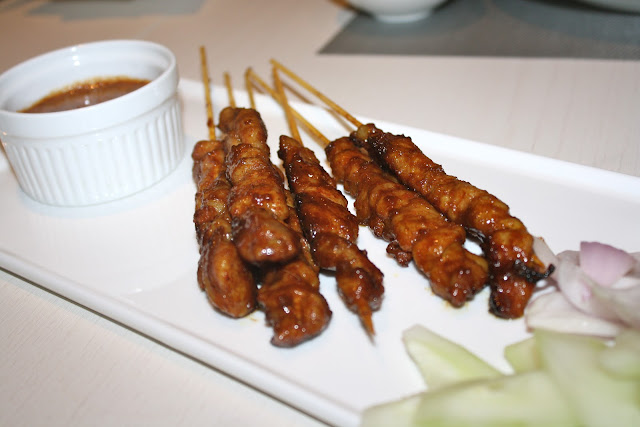 Moving on to the other starters, i find the Grilled Chicken Satay in Balinese Spices mediocre. I am a fan of pork satay because of the fatty meat from the pork. The chicken was tender, but i felt that the chicken wasn't charred enough to bring out the barbeque flavor. The sauce however, was light yet rich at the same time, which kind of made up for the chicken. 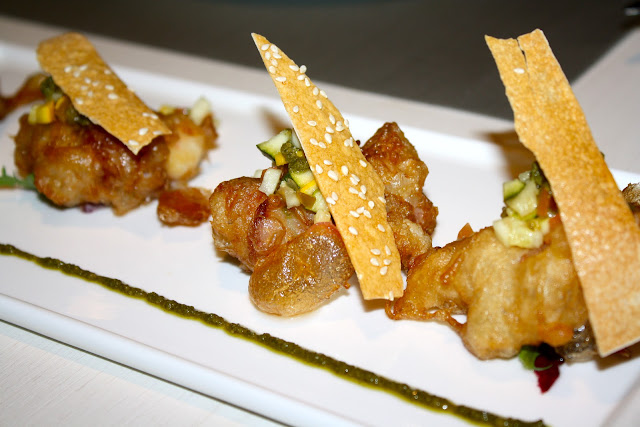 The last of the starters was the Prawn and Bacon Roll - prawn wrapped in bacon and coated with egg white. The crisp golden light batter from the egg white certainly got a thumbs up, topped with zucchini and with a semi salty and sweet inside from the prawn and bacon - it was oily but sinfully good. 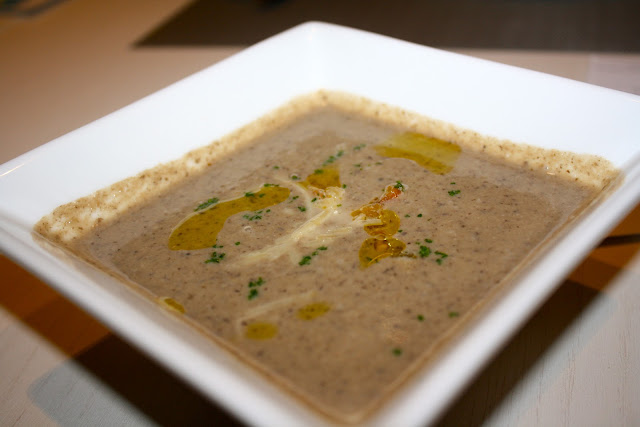 I couldn't resist ordering the Mushroom and Tomato Soup after briefly scanning through the menu. Mushroom soup normally do not come with tomatoes, so i was guessing if the soup was going to come brownish-grey (like how normal mushroom soup looks like), or red. Drizzled with olive oil (i was hoping truffle oil) and with chunks of tomatoes inside, the soup had a good consistency and wasn't overly thick. It was a pretty generous serving for soup so i recommend this to share. 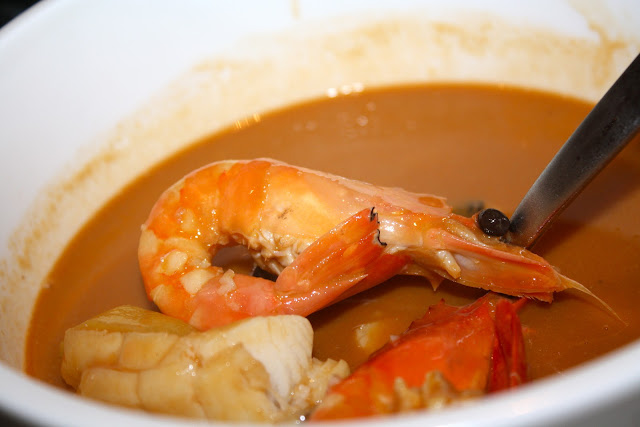 If mushroom and tomatoes is a little too mild for your taste, and you want something more Mediterranean, go for the Marseilles Seafood Bouillabaisse, which tasted like lobster bisque, except that you find slices of fresh fish, squid, prawns and scallop in it. The only downside was that it got a little too overpowering towards the end and the prawns were slightly overcooked. 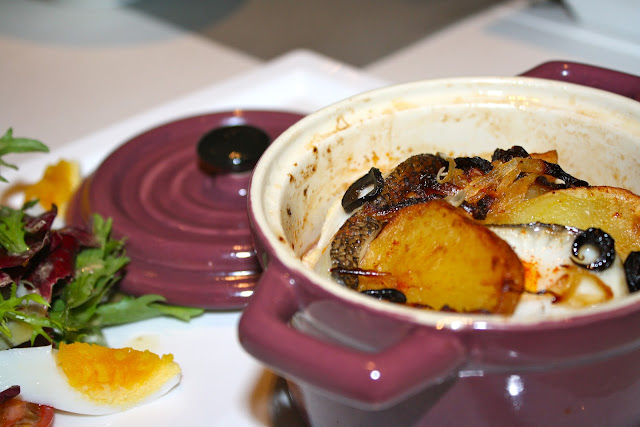 Cooked in a casserole, the Stewed Fillet of Danish Cold Water Halibut was simple yet flavorful. Tomatoes, potatoes, slices of fish and topped with olives. The natural sweetness from the fish, alongside the tanginess from the tomatoes gave this dish a very healthy feel. 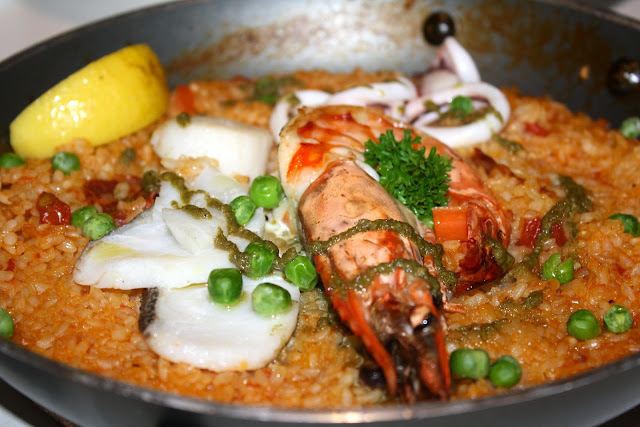 If simple is not your thing, the Jumbo Prawns with Dill and Saffron Paella is a pan bursting with colors and flavors. The paella was done well, but the main star of the dish was a bit of a disappointment - the prawn was overcooked. 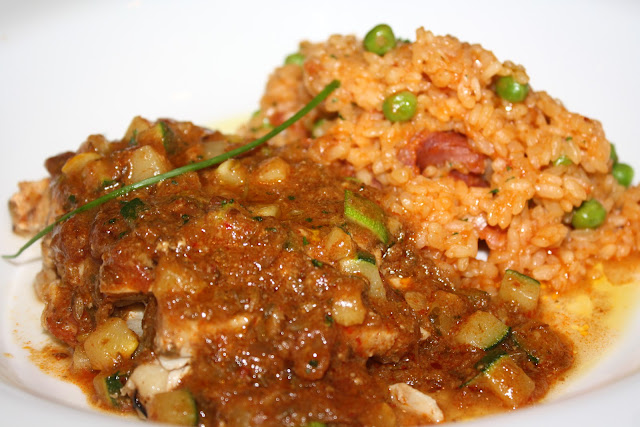 Another flavorful dish would be the Moroccan Harira with Chicken and Garbanzo Beans, which tasted a bit like the spices from the Indian Briyani Chicken. Again, the main star of the dish was disappointing - the chicken breast was dry but the tangy and spicy sauce full of spices made up for it. 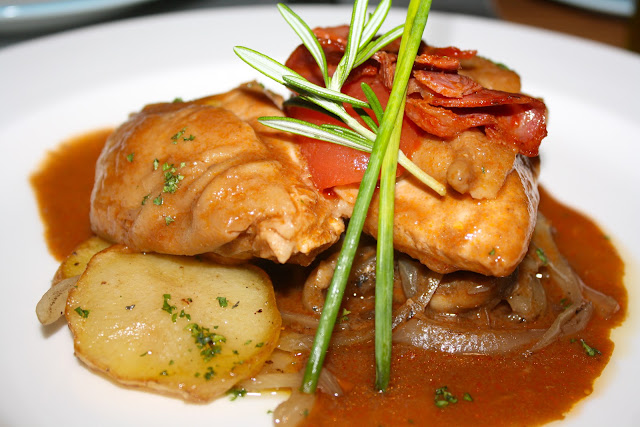 Something healthy to consider is the Braised Chicken Breast, served with chorizo and tomato confit. Unlike the chicken in the Moroccan Harira, the meat here was much more tender with the correct moisture sealed within. And plated with the correct amount of carbs (potatoes), this makes for a simple healthy dish. 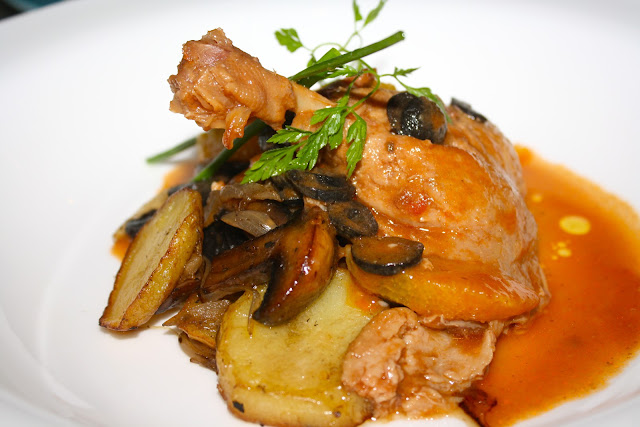 If Mediterranean and seafood does not work, you'll be glad to know they also serve French food, such as the Braised Citrus Duck Leg. The duck meat fell off the bone effortlessly and it was served with a generous amount of mushrooms, which i thought complimented the duck very well. 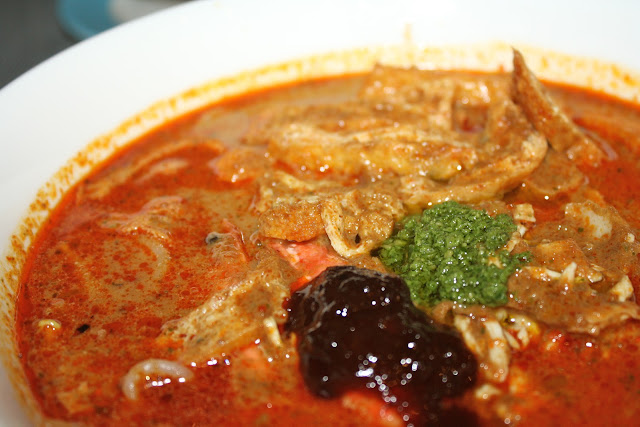 And if you are a true Singaporean who enjoys spicy and "heavy" food, the serving of the Singapore Laksa here is massive. The bowl size was of a basin and within the rich and thick gravy you find prawns, fishcake, chicken shreds and bean curd skin. Doing it with a twist, they added pesto instead of laksa leaves on top, which brings the whole dish to a entire new level. 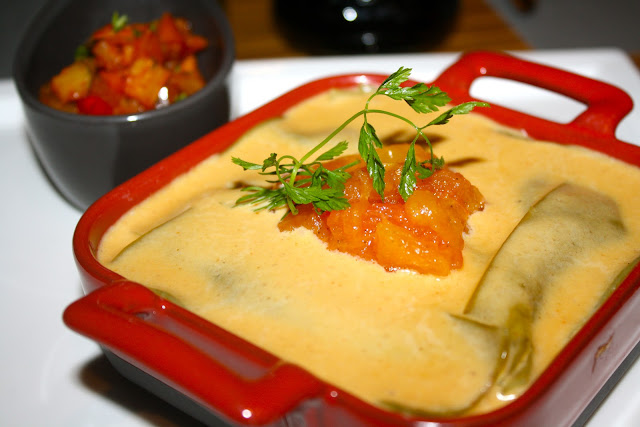 Crabmeat pasta is common on most restaurant menus, but at 21 on Rajah, you get lasagna with it. The Lasagna of Spinach is already something different, but with a generous amount of fresh crabmeat, the dish couldn't get better. I however felt the whole thing needed cheese, but nevertheless it was still creamy and good. 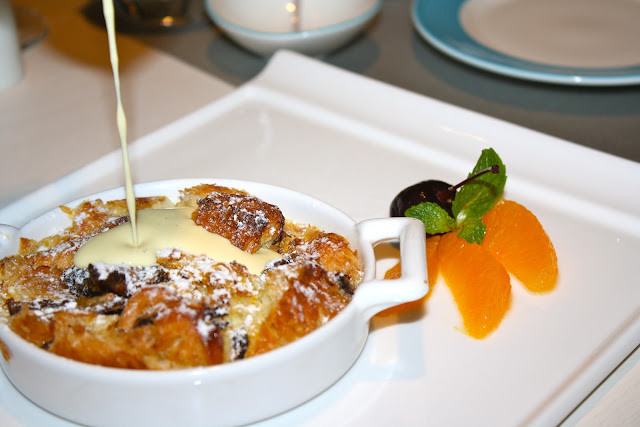 For desserts, we had the Pannetonne Bread and Butter Pudding with dates. It had a golden crusty top but lacked dates. Also, the inside of the pudding was moist and the sauce wasn't overly sweet. I like my desserts not too sweet so this certainly got a green light, except that it needed more dates or raisins. 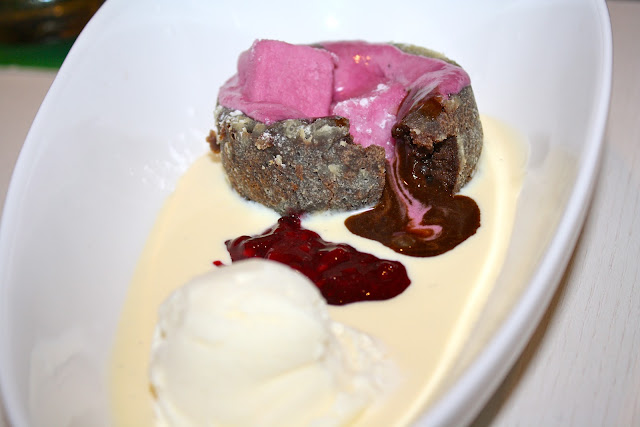 If you are a chocolate fan and need to end off your meal with something chocolatey, try the Dark Chocolate Fondant with Raspberry Coulis. I could tell that the chocolate cake was flour-less within the first mouthful because it was light, which was a plus point. The only thing i didn't understand was the marshmallow on top of it, which were slightly artificial in taste. Overall, chocolate lovers will still love this because of the rich chocolate flavor. 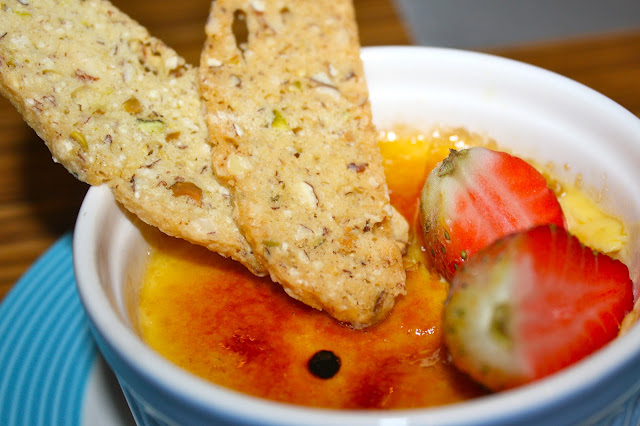 My favorite of the lot has to be the Pumpkin Creme Brulee, which was served at the right temperature and had bits of pumpkin fibre within the creamy custard. I have high standards for my favorite dessert but this really did make the mark.

Mediterranean food isn't that easy to find in Singapore, but at 21 at Rajah, you'll probably be able to settle that craving with the variety of different dishes offered on their menu. And if you are a seafood lover, you'll be glad to know most of their dishes have seafood in it.