You have to admit that The Central is the place to go if you are craving Japanese food. The number of Japanese restaurants there cannot be counted with both your hands (unless you happen to have 8 fingers on each hand). And with so many Japanese restaurants to choose from, you sometimes wonder if you should go with gut feel, or just follow the one with the longest queue. 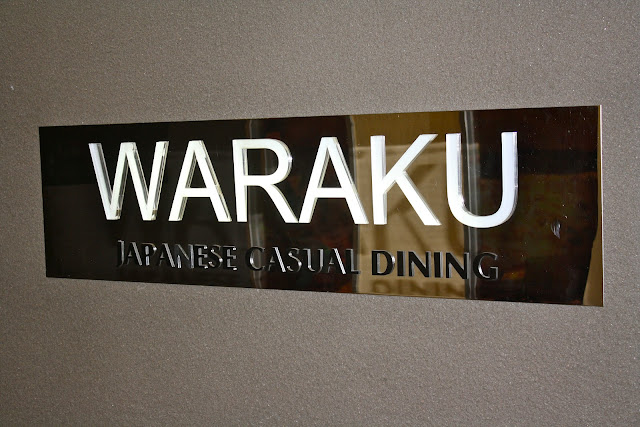 And if you ask me where i'll safely put my bet on without losing any credibility, i'll tell you Waraku Japanese Casual Dining. I've been to Waraku a couple of times, and each time i leave there satisfied (and wanting to come back for more). This casual dining restaurant, which also means you can get comfy in berms and flip flops without being judged or being refused entry is probably one of the better casual Japanese restaurants in town. 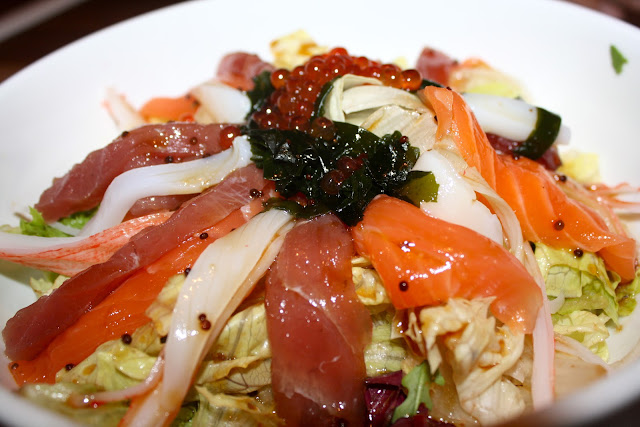 We started off with the Hokkai Salad which had an assortment of raw fish ranging from salmon, ikura, squid and tuna. I would say that the cuts were pretty decent even though they were served on a salad, and the bountiful topping of ikura pretty much "wow-ed" me. The dressing also had a slight hint of wasabi, which i really liked as well. 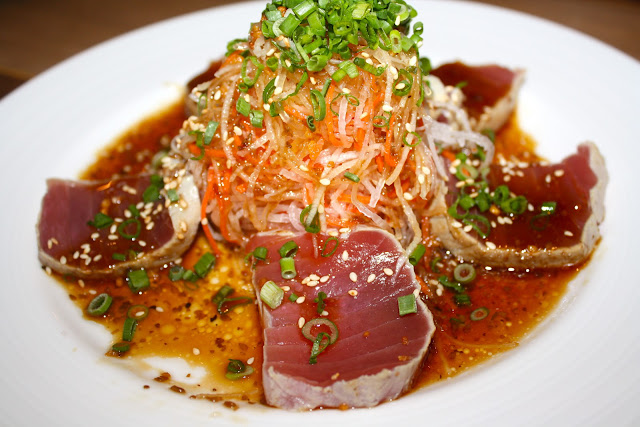 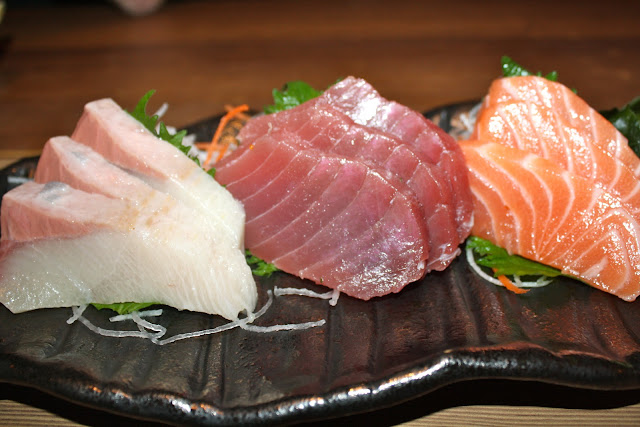 If you are a tuna fan, you cannot miss out on the Maguro Carpaccio at Waraku. A few restaurants in town do this well and Waraku is one of them. Served cold with shredded raddish and carrots, all soaking up the goodness from the sesame sauce, we polished the perfectly seared tuna slices off in no time.

However, if you like your stuff the natural (the way it is), you can opt for Sashimi 3 Kinds, which consist of salmon, tuna and yellowtail served fresh. And if 3 is not enough, you can go for the Sashimi 5 Kinds. 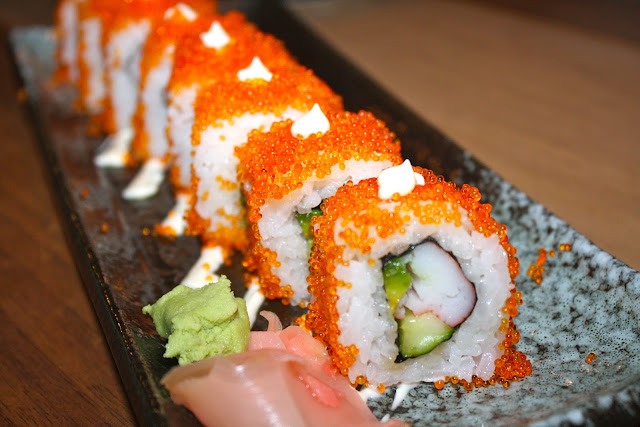 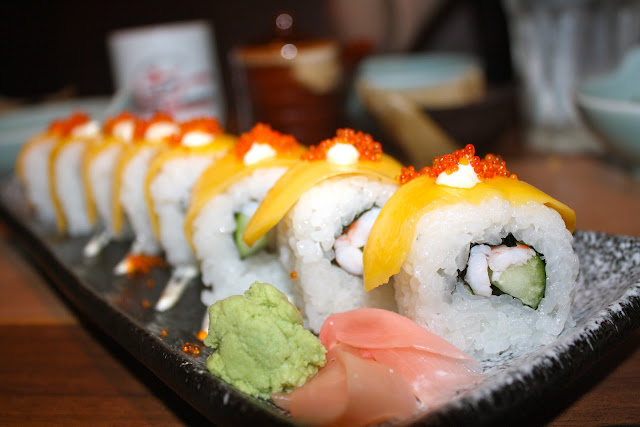 Maki lovers will be glad to know they also serve quite a range for you to choose from. The Ura Maki which had avocado, cucumber and crab stick with tobiko was good but at the end the one that stole my heart was the Ebi Mango Maki which had sweet prawns and cucumber topped with slices of sweet mango and tobiko - the sweet slices of the mango paired well with the prawns and the cucumber gave the whole maki a good bite. 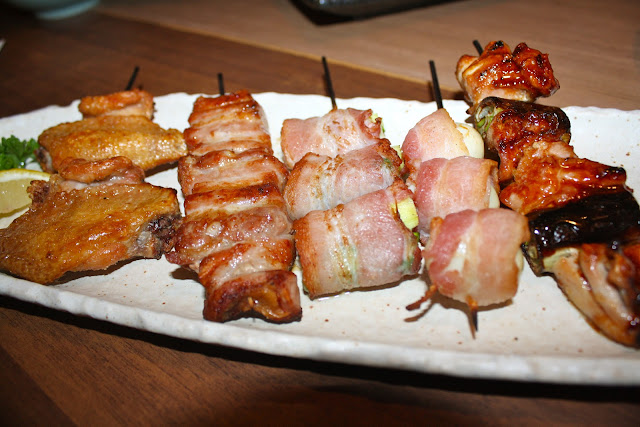 Waruku basically has it all (well, almost all). They also offer skewers (or some say Yakitori) for those who prefer things off the grill and a bit charred. And if you cannot decide which one to get, go for the Yakitori Mori 5 Kinds. My pick will have to be the Tebasaki (grilled chicken wings), which were lighty salted and cripsy, the Buta Buta (grilled pork) and the Uzura Bacon (grilled quail eggs wrapped with bacon), which i thought was something more unusual as compared to the mainstream bacon and asparagus. 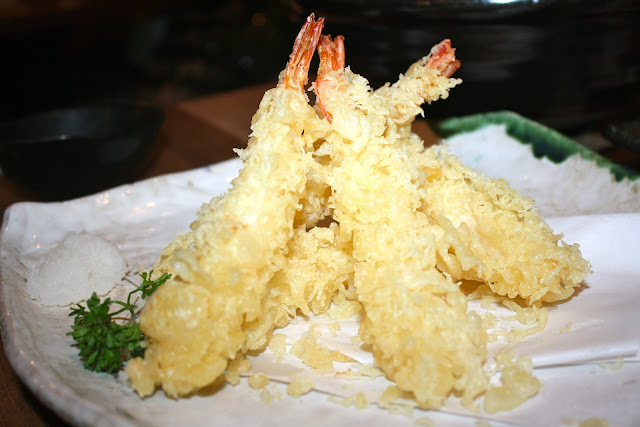 And for those who do not really care about what the number is on the weighing scale, the Ebi Tempura which had a light crispy batter is definitely worth the calories and will make you very happy. 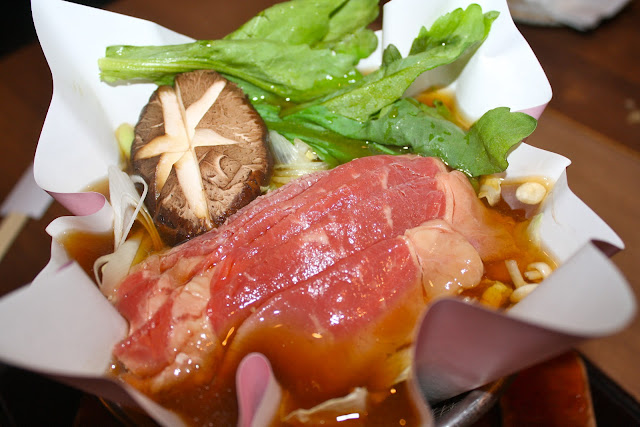 Not one of the best dishes at Waraku but if you are easily amazed by little things, you should try the Kaminabe, which comes in Beef, Chicken or Seafood. This paper pot (yes, paper) does not burn despite a flame underneath keeping the soup constantly boiling while you enjoy slices of beef, chicken or seafood with aplenty of fresh greens and mushrooms. 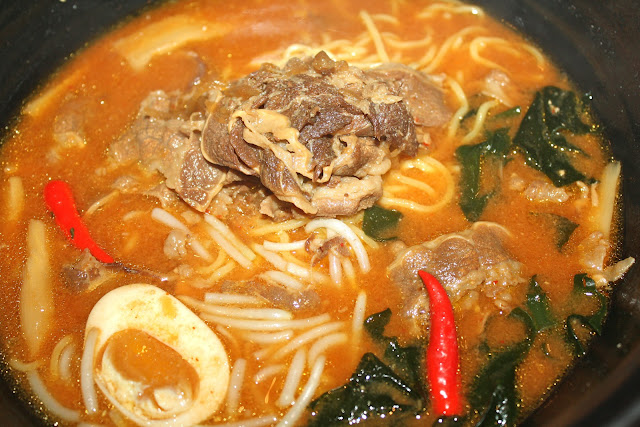 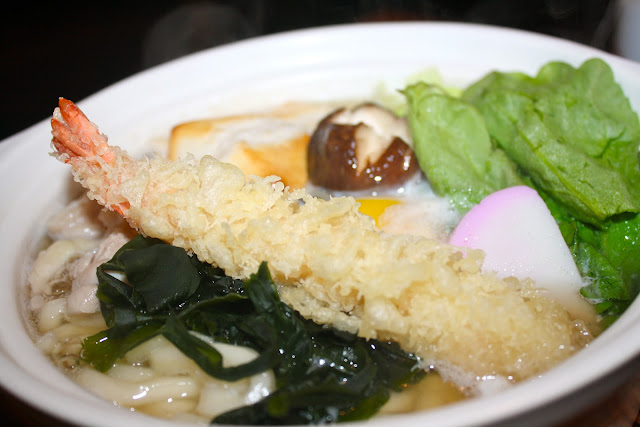 We also tried the Niku Chige Ramen which had a thick and flavorful soup base with slices of beef and springy ramen, which also happens to be one of my favorite dishes at Waraku now. It may not be the most photogenic or presentable bowl of noodles but definitely one of the yummiest.

If you like things simpler and plain, try the Nabeyaki Udon with a choice of beef or chicken. The pot suprisingly also has mochi (rice cake) in it, which i thought was quite uncommon. 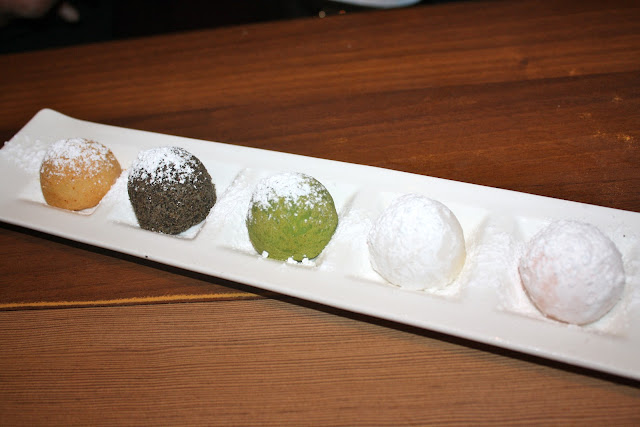 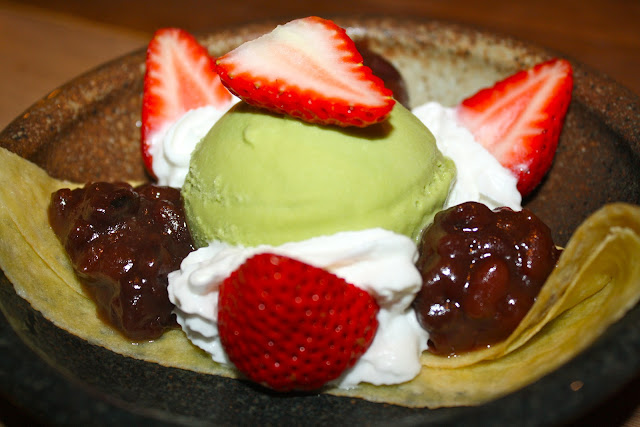 The Assorted Mochi for dessert however, didn't exactly satisfy the aching sweet tooth of mine. Instead, the Macha Crepe served with azuki beans and fresh cream did. The green tea ice cream wasn't overly sweet, and the slight sourness from the fresh strawberries pretty much evened out the sweetness from the azuki beans.

The truth is, Waraku has almost everything one would need to satisfy their need of a proper Japanese meal. Adding on to that, their restaurant at The Central has one of the better views one could possibly ask for, especially on a date - the restaurant overlooks the Singapore River. The best part will probably be that dining at Waraku with a view and good food won't cost you an arm or a leg. And now, you can thank me because you won't have to wrack your brains about which Japanese restaurant to choose when you are at The Central.