Singapore Class - So What Exactly Is It? 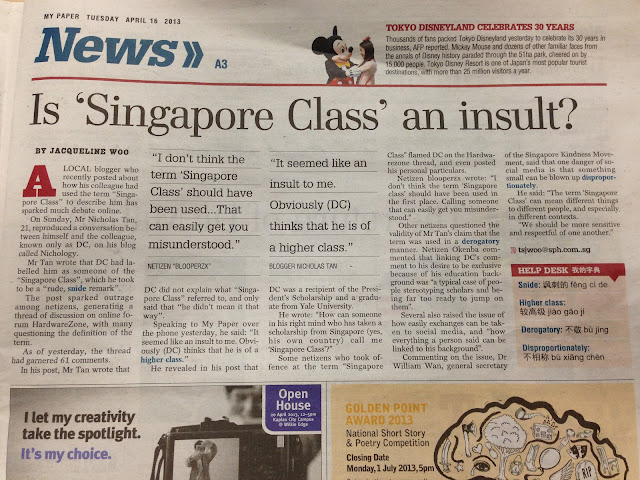 
My Paper published an article on 16 April 2013  - "Is Singapore Class an insult?". Honestly, "Singapore Class" can refer to many things, but in this case, the conversation between DC* and me has clearly shown that he referred to "Singapore Class" as a class lower than himself.

While others were quick to point fingers at me, with comments that i am being petty, too sensitive and showing signs of inferiority complex, i would like to clarify once again that the post was not written with the intention to gain sympathy as if i was a victim of someone trying to specifically degrade me.

Instead, what i clearly wanted to put through was the point about DC* creating a class labelled as "Singapore Class" when there clearly should not be any class differentiation in Singapore among Singaporeans - we are all equal.

The post was also not written with an intention to put DC* down or make any defamatory accusations about him. I never intended for it to go viral even though i am a blogger of sort, but netizens were quick to discuss this issue, which later caught the attention of the mainstream media.

I was asked by DC* on Monday, 15 April 2013 to retract my post, which i politely declined to. During the persuasion period, i asked DC* what exactly was "Singapore Class", to which he evaded the question, again. Prior to that, no apology was given pertaining to this issue. I would like to believe that his main concern was for me to retract the post. 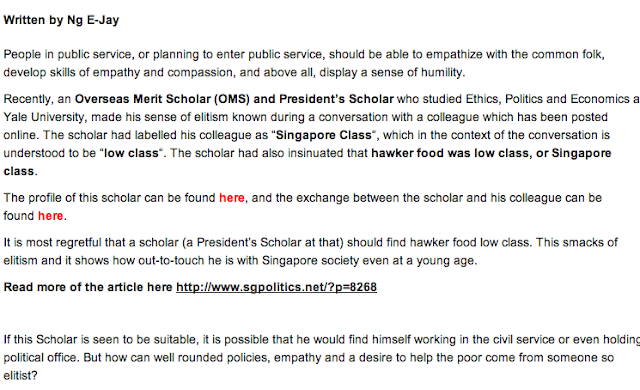 "Humility needed for those entering or planning to enter public service" on TheRealSingapore.com

"President Scholar and the Singapore Class" on Sammyboy.com

I would also like to highlight that because this issue has been widely discussed among forums and on websites, i do not have control over what has been posted on other sites. As My Paper reported - "Some netizens who took offence at the term "Singapore Class" flamed DC on the Hardwarezone thread, and even posted his personal particulars. "

This incident has taught me that one should not be quick to shoot his mouth off. Such untactful comments made by DC* creating a different class between Singaporeans was uncalled for, especially from someone with such high education standards. I would like to specifically re-quote what Dr William Wan, general secretary of the Singapore Kindness Movement, said "We should be more sensitive and respectful of one another."

Another thing i learnt is the new term "Singapore Class", which so unfortunately i (or if i may say we) will never know the real meaning behind those words.
Posted by Nicholas Zayden Tan