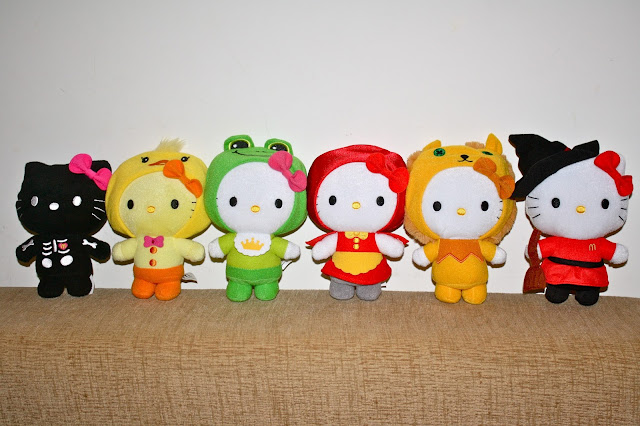 The craze will soon blow over, since the last version of the Hello Kitty Fairy Tale collection has been launched (and also sold out) within a couple of hours. People started queueing at McDonald's a few hours before the launch, and with some stores launching it at 12 midnight, and some at 6 or 7 in the morning, it didn't help with the situation.

McDonald's should have standardized their launch hours and every store should be selling it only at a stipulated time. This allows people to strictly be entitled to 4 purchases and not allow them to go from store to store (some launch at midnight and some in the morning) to re-buy the toys again and again.

There was also no official queue made even though queues for the morning stores started at midnight. This allowed people to queue on behalf of their friends, and allowing them to join in the queue later on. McDonald's should have officially given out the queue numbers as soon as they realized that the supply could not meet the demand instead of giving people false hope.

After queueing with a friend at a store for almost six hours (from midnight till the opening), the store manager decided to come out at 5.30am to issue coupons. There were about 500 people in the queue and we were supposedly within the first hundred (before others started to cut the queue). The coupons were issued to the first 100 people since everyone wanted to buy four toys each and they only had 400 toys in store.

My question to McDonald's Singapore would be :

"If you knew there wasn't enough supply to meet the demand, why didn't you tell people earlier instead of making people queue through the night and tell them just 30 minutes before your opening that you do not have enough toys?"

The next best part about their half-witted management was that they didn't dare to walk to the end of the queue (about 400 people behind me) to tell them it was sold out. Instead, people had the mindset that they would get a toy if they stayed in the queue and foolishly continued to queue only to realize that they won't be able to get it after a few hours of queueing. Thankfully, we were smart enough to leave the queue after knowing how the system works.

At another outlet, there was a young boy in front of me selling his coupons and toys in the queue and the store manager at the scene was telling people in the queue that there are no more toys and their only resort was to buy from people who queued, or go online and buy it from eBay. Why would a manager condone such behavior from the black market sellers?

To be honest, the staff working at each outlet looked like they were enjoying the "free entertainment" given by the people queueing (probably only once in their life time they felt "powerful" as a McDonald's Manager).

Also, there were fights breaking out everywhere and the police had to be called in every now and then, wasting our government resources just because of poor management by McDonald's Singapore. In the drive-thru stores, traffic police had to be called in to make sure traffic was not disrupted. McDonald's should have clearly closed the drive-thru like what they did from McDelivery.

Which brings me to my point, if McDonald's are smart enough limit their sauces, why weren't they smart enough to limit their Hello Kitty. One outlet had approximately 400 toys and they limited each person to buying 4 each. Really McDonald's, were you expecting only 100 people to queue for each store? Or did you just want to watch a free show thinking we consumers are circus animals?

I suggest the higher management at McDonald's Singapore start thinking about how such future events can be planned better instead of stuffing their faces with McMuffins and McSpicys. Either that or eating too much McDonald's makes you stupid (like them).
Posted by Nicholas Zayden Tan