Located at a slightly secluded corner of Vivocity, The King Louis is not often known by shoppers of the mall. This restaurant emphasizes a majestic ambience, reflected through the rustic decorations of the place. The television screens films such as The Chronicles of Narnia to complete the medieval feel. The back of the restaurant also faces the sea, which certainly is quite a sight. All these said, the food at King Louis is also served in epic proportions. 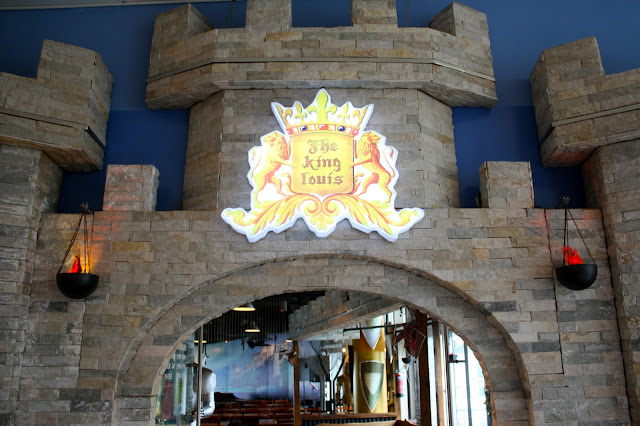 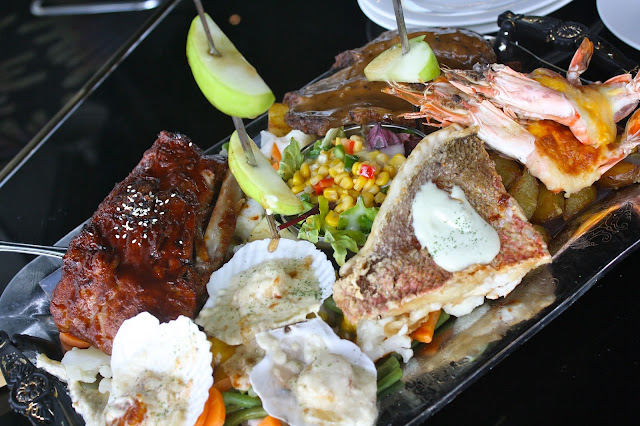 One of the must-try at King Louis has to be the banquets - an original concept by the owner of the restaurant. A 'banquet' is a platter of delight, ranging from solely meat, seafood, or a combination of both. We tried Queen Victoria banquet which was a meat and seafood platter. The platter was served with cheese-baked prawns, pan fried snapper, scallops, beef and pork ribs, and one side of the tray is buried with mixed vegetables, the other with baked potatoes. There are also two skewers of caramelized apples and pineapple and salad in the middle. Talk about a meal fit for a king! 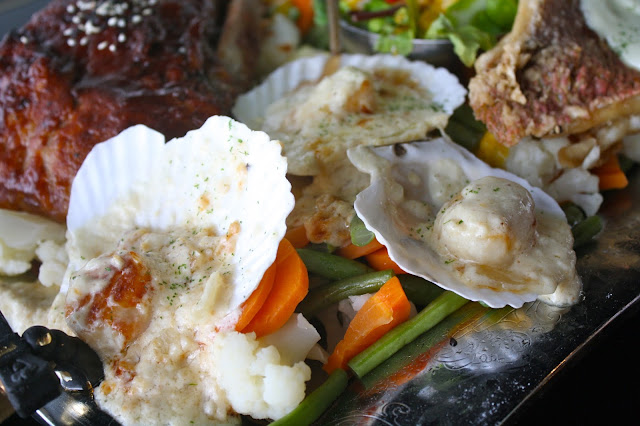 The baked scallop was served up in generous garlic cream sauce. The scallops were tangy to chew and the cream was not too overpowering. It still captures the seafood goodness of the scallops. 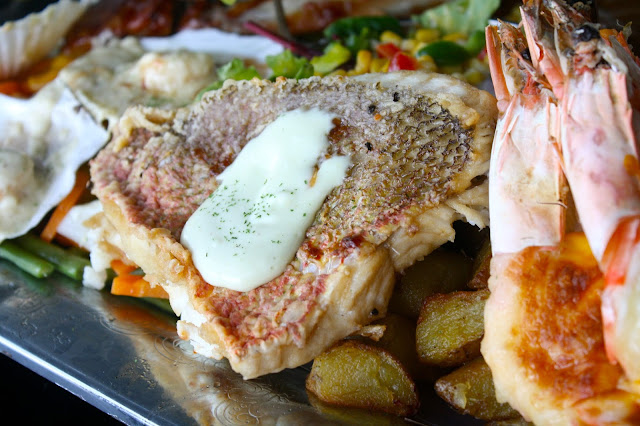 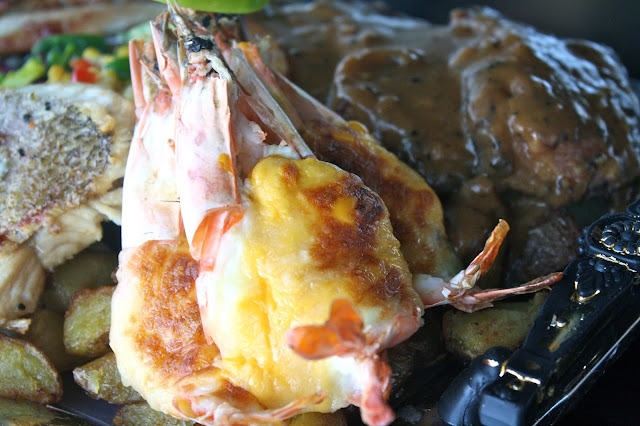 The fried snapper and prawns were however, were a little overdone. The fish meat came off flaky and quite dry, making it a little hard to swallow and the prawns were rough in texture with too much cheese, which potentially killed the freshness of the prawns. 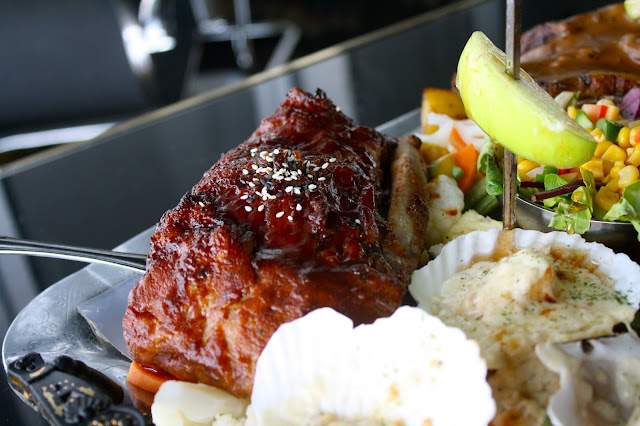 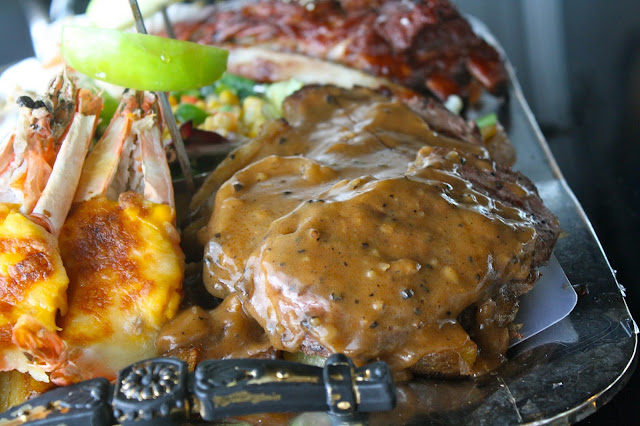 Between the beef steak and pork ribs, i would pick the latter. The meat of the ribs fell off the done easily and were cooked with the right doneness. The steak however, wasn't as impressive as i expected it to be. It was good, but not fantastic. 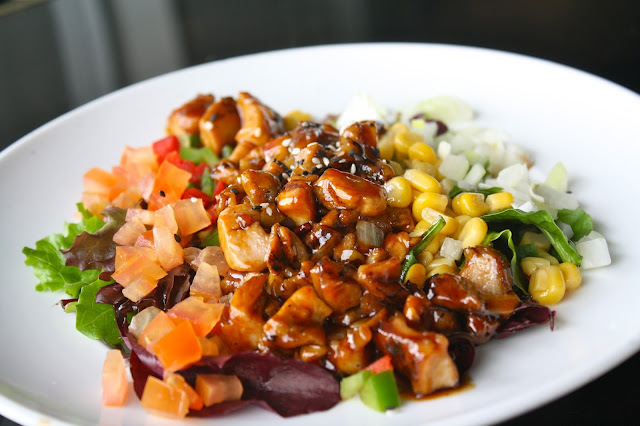 The Teriyaki salad is quite special - for starter, it is served hot. The sweetness of the teriyaki sauce effectively eliminates some of the bitter-tasting purple lettuces, and the chicken is also in bits and chunks, adding to chewing comfort of the salad. 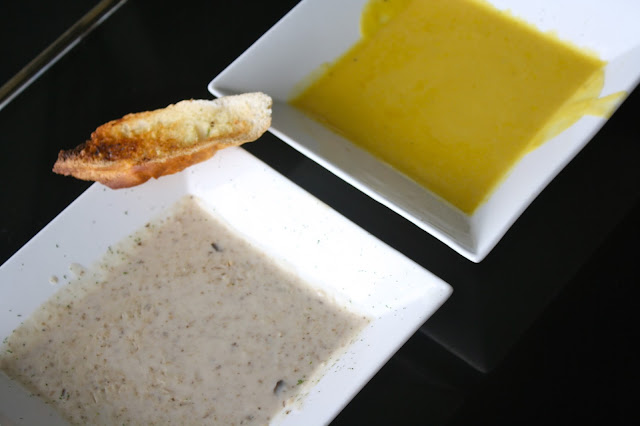 We also had Mushroom Soup and Pumpkin Soup which were pretty huge servings for soup. I preferred the pumpkin as it had a smoother and creamier texture compared to the mushroom that had a chunky texture with bits of mushrooms in it. The partner however, preferred the mushroom.

The view at The King Louis is pretty spectacular - overlooking Sentosa Island. The only downside will be the prices, which i thought were a bit on the high side (for the banquets) as compared to most restaurants there. My recommendation however is to go in a big group, as the banquets feed at least 3 - 4 people easily.