Is it possible for one to get tired of Japanese food? I end up asking myself the same question each time i step into a Japanese restaurant, and always end up eating more than i expect. At Ebisboshi Shotengai, things weren't any different with the wide selection of dishes on their menu. 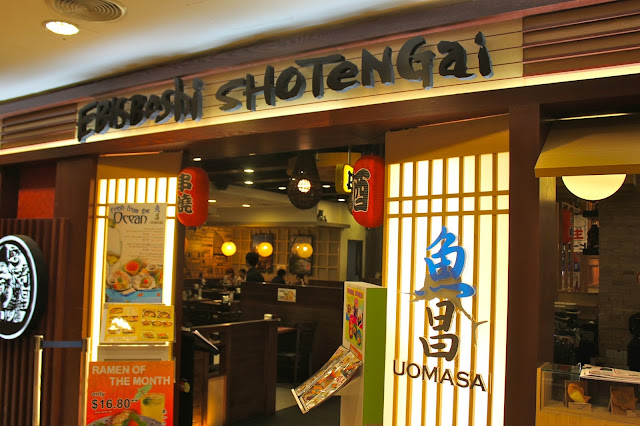 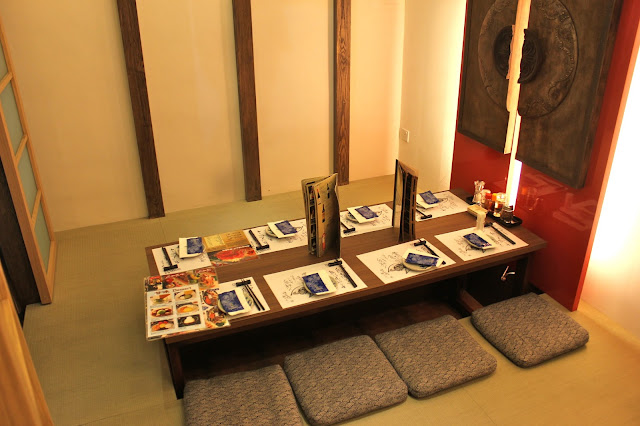 The restaurant also features Zashiki style dining rooms where you sit on cushions instead of chairs, which are limited. 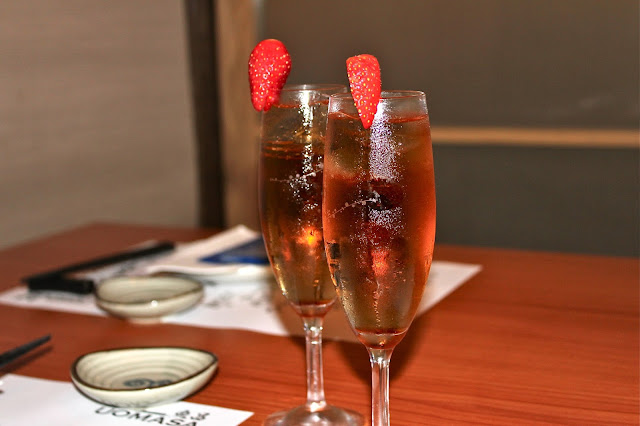 By far one of the better plum drinks i have tried at Japanese restaurants, the Ume Cocktail is one that can be tailored to suit almost everyone. It was refreshing yet not too overpowering from the alcohol content. They also serve a few unique drinks which are not on their drink menu and can be requested depending on your preference. 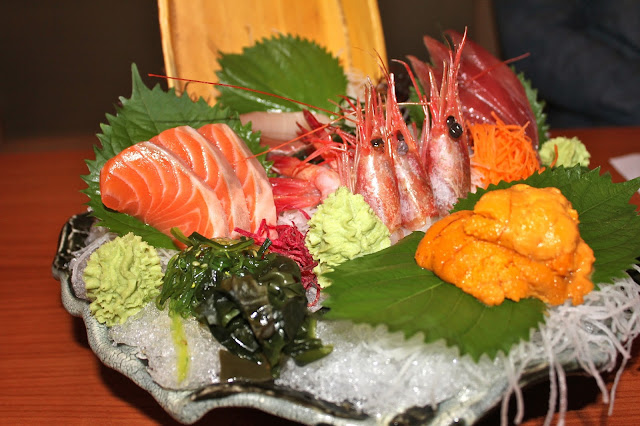 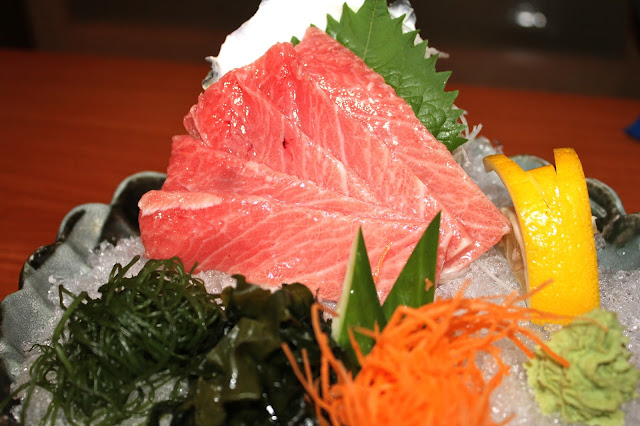 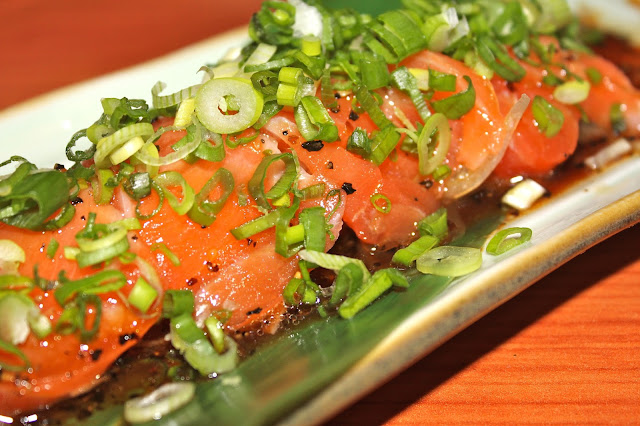 Starting off the meal was the Sashimi Mori Matsu which consists of yellowtail, salmon, tuna, prawns and sea urchin. There was almost nothing to complain about this dish, except that there wasn't enough to feed the glutton in me. For the price however, i must say the cuts were reasonable and there was a generous amount of sea urchin, which came with seaweed separately on the side. We also tried the Maguro Otoro (Tuna Belly) which melted in the mouth and the Salmon Carpaccio that had a slightly over-tangy dressing, but worked well for me. 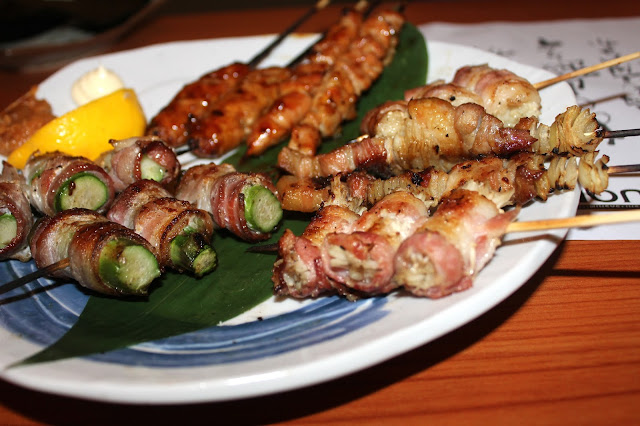 We moved on to the Yakitori right after that. The platter we had was an assortment of five different kinds, my favorite - the bacon and asparagus, as well as the pork belly and onions. I liked the fact that they used thick asparagus instead putting a few thin ones together and wrapping it around with bacon. The asparagus was cooked nicely and was crunchy with the bacon not overcooked. 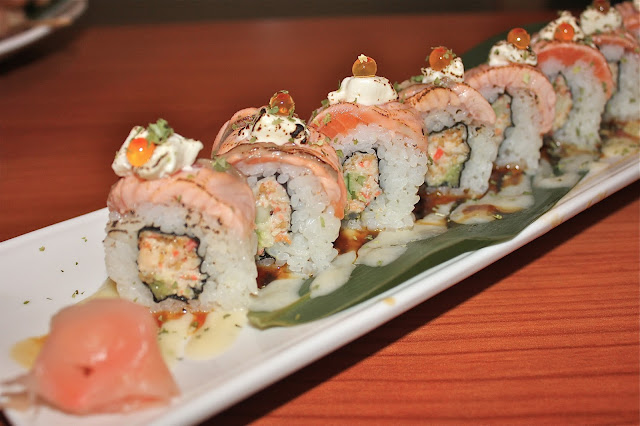 Another dish that deserves a mention is the Philadelphia Roll with consists of salmon on top, crab and cheese in the middle, topped with more cheese and drizzled with a sauce that brings out all the flavors of the roll. 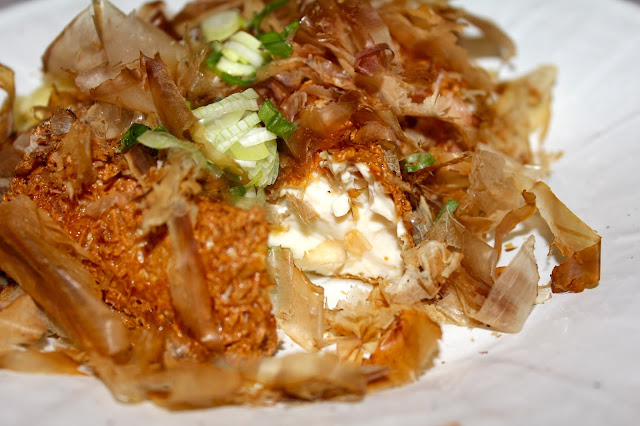 We also tried the Atsuage which had a very crispy outside and was smooth silky inside. There was no sauce for this dish, but instead it was topped off with a very generous amount of fish flakes and ginger on the side. Supposedly to be eaten with such soy sauce, i liked that this dish was full of bite and texture. 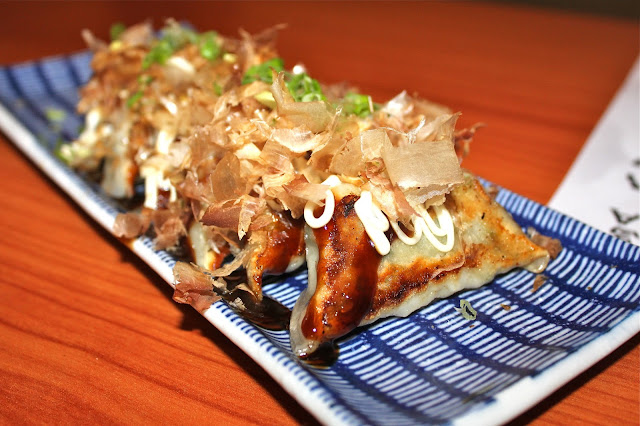 My favorite dish at Ebisboshi Shotengai has to be the Okonomiyaki Gyoza which is handmade freshly on site. Unlike other places which may get their fillings from suppliers, they make their own fillings from scratch. Topped with fish flakes and a slightly sweet yet savory sauce, this dish got two thumbs up. 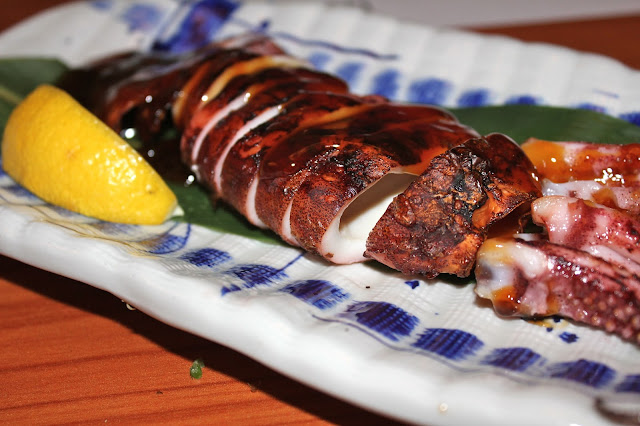 The Ika Tenyaki, also known as grilled squid was grilled nicely as well with the right amount of sauce on it. 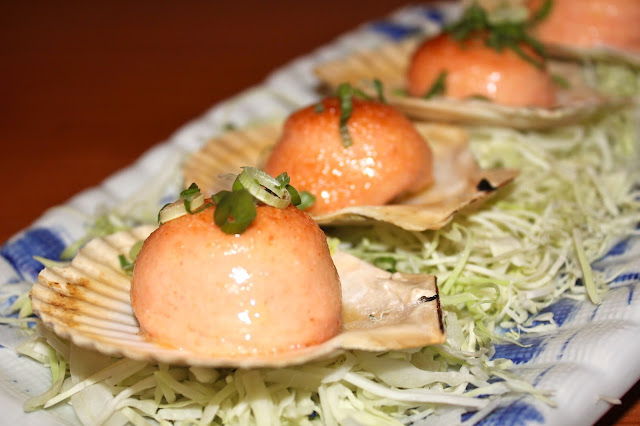 What is a Japanese meal without Mentaiko? We had the Hotate Mentaiko Yaki with heap load of mentaiko covering a juicy scallop. The only downside was that there was too much of mentaiko that overpowered the sweetness of the scallop. 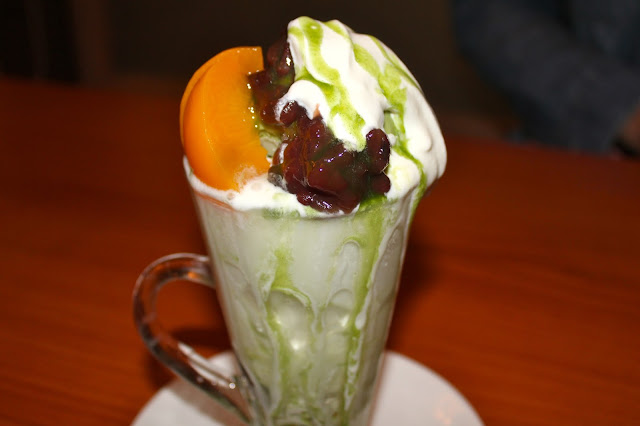 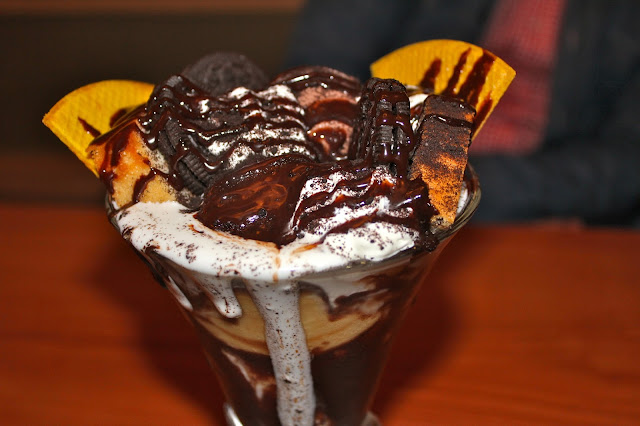 We were too full by the time dessert arrived but we still gave it a go. The Green Tea Azuki Parfait and a chocolate dessert with pudding that was specially created for us were good, but not mind-blowing good (either that or we were too full from everything else). Still, good enough for us to have finished half of both at least.

The prices at Ebisboshi Shotengai aren't sky rocket high for the quality you are getting. In fact, if you were to ask me - they are pretty reasonable. The only thing i am uncertain about is their location, Great World City, which isn't easily accessible by public transport. But hey, if there is one thing i learnt so far, it will be that people are willing to travel for good food. They only open until 15 October 2013, so i suggest you set a date as soon as possible.