When I got my new keys to my pad earlier in April, my biggest concern was how was I going to renovate it. It's a really small space so ideally I really needed something really functional because I have tons of stuff to keep and media drops coming in almost every other day. The apartment came with almost nothing, except a few cabinets, a fully-fitted bathroom and kitchen appliances.

On top of that, I've been shared enough horror stories about interior designers that over-commit and under-deliver. It didn't help that my parents were also about to renovate their place as well, so I was forced to move out while they took turns with the rooms at their place. I knew that I obviously needed an interior design firm that I could trust to do the job without any hiccups, or minimal hiccups I would say. I asked around and suddenly remembered that my friend Diah (www.etrangle.net) had recently done her second home renovation with Icon Interior Design, so it was quite brainless to ring them up to get a quote for my place.

I was introduced to Jason, one of the many really great Interior Designers that they have on board with them. He took a look at the floor plan, we discussed the style and feel I wanted for my new crib and within a week I literally got drawings for the new place already!

I'm not going to bore you with the nitty gritty stuff, so this post is going to be about the place in general and what we have came up with. For a start, it was quite tedious to squeeze in a good sized sofa, as well as a proper dining area that I could throw dinners when friends and family come by. 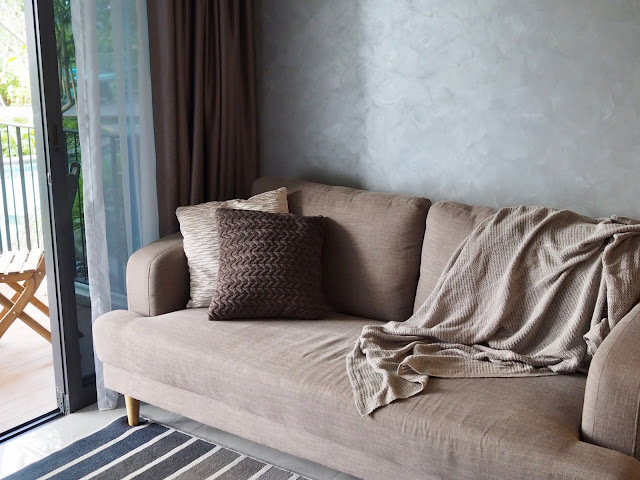 Initially wanting to go for a paint with a greyish tone, I was recommended to try out Nippon Paint's latest addition to their paint family - Momento Special Effects. The entire wall that links the dining and living area was created using the paint that was painstakingly done for an entire day. It requires 4 coats of paint and cannot be rushed as it every layer needs to set before applying the next coat in order to achieve the Momento effect!

We also figured that we could fit a 55" television in so we created a feature wall that matches the dining area and storage area it. Using Keminates, I loved how they offer a great variety of laminates and managed to achieve the Scandinavian look from it! 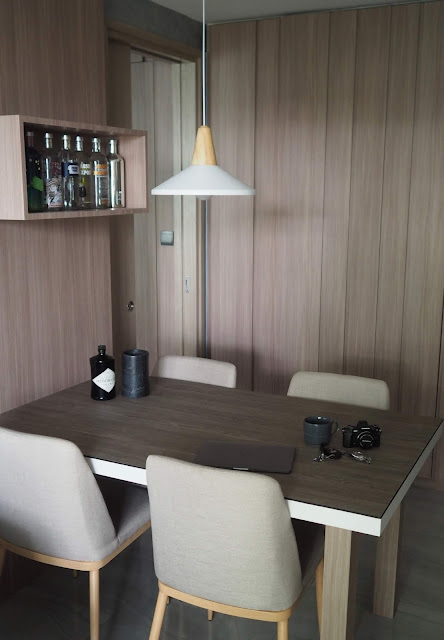 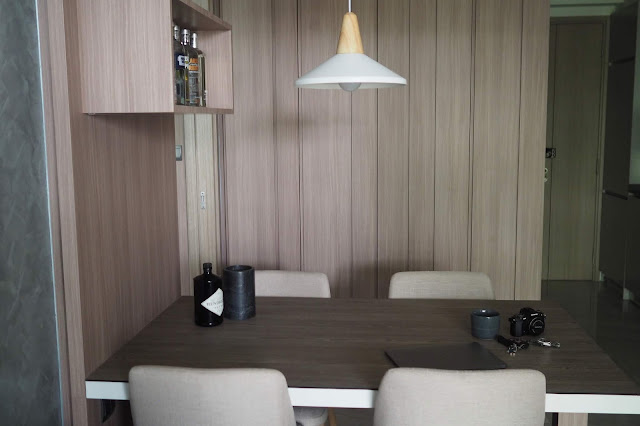 Instead of buying a dining set, we created a dining table that was customised to match the entire feel of the place, as well as a size that would comfortably fit 4 (or sometimes even 5). The table-top was created using KompacPlus, they are highly resilient to wear and tear, are water and steam-proof and non-porous, hence making them extremely durable! We also fitted in a shelving for some booze, as well as some mood lightings at the back of the carpentry in case I wanted something more cosy instead of the dining light. 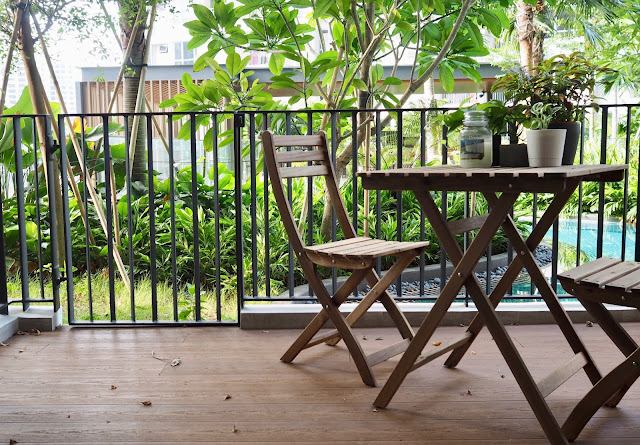 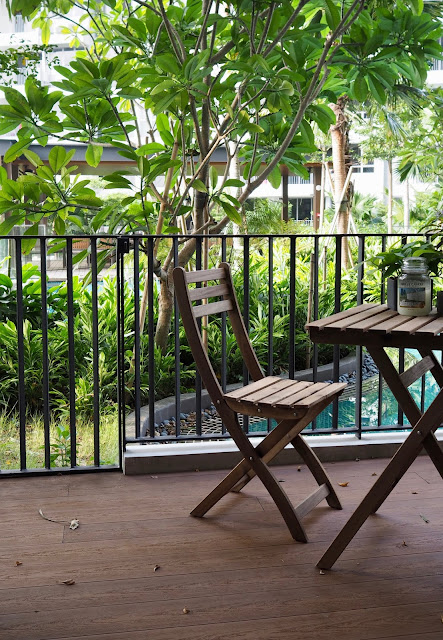 Initially just tiles, I was recommended to layer the patio with Evorich evoDECK. The evoDECK is a wood composite decking that adds realistic wood appearances with natural looking grains. Unlike natural wood, this does not require much maintenance as it is weather friendly, scratch proof and most importantly, any stains on it be easily washed off. To be frank, I found this rather useful because it's a pool access unit and most of the time my friends and I come up from the pool dripping wet. With the evoDECK, I don't have to worry if there's access water all over! In fact, sometimes out of laziness I just let it dry up naturally without having to worry about having to mop it! It's super fuss-free and I highly highly recommend it to all of you guys, especially those with balconies and patios! 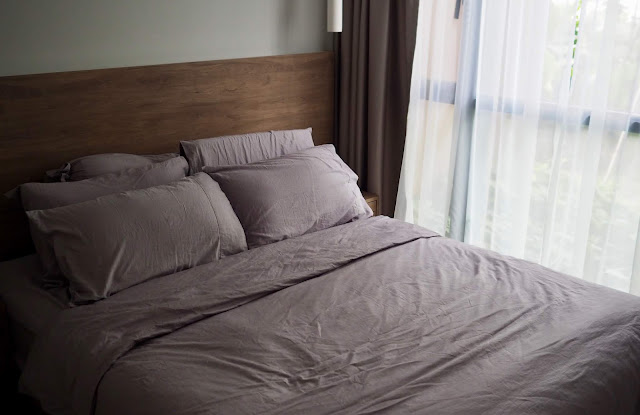 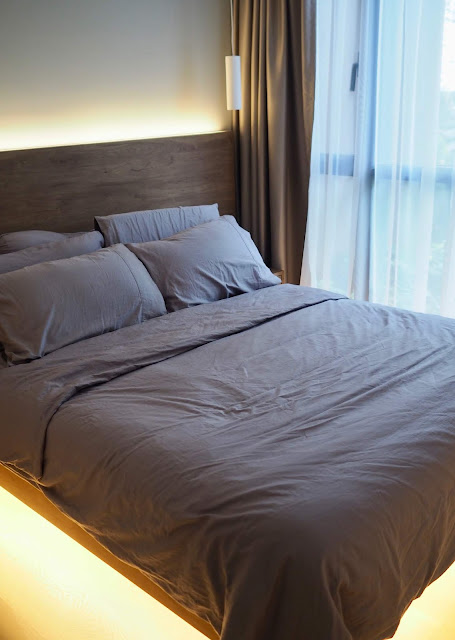 Using Keminates again, Jason knew that I clearly that I wanted my bedroom to be minimalist. It's a small space I won't deny, so fitting in a king with 2 side tables was going to be a problem. Instead, he recommended me to go for a queen and incorporated 2 side tables for aroma diffusers and my phone. He also recommended suspending lights on each side so that the table space wouldn't be compromised. For the luxe hotel feel, we also added lights on the top frame and bottom of the bed, so there's an option for a cosier feel when I turn down in the evenings! The entire bedframe was custom made using laminates from Keminates as well! 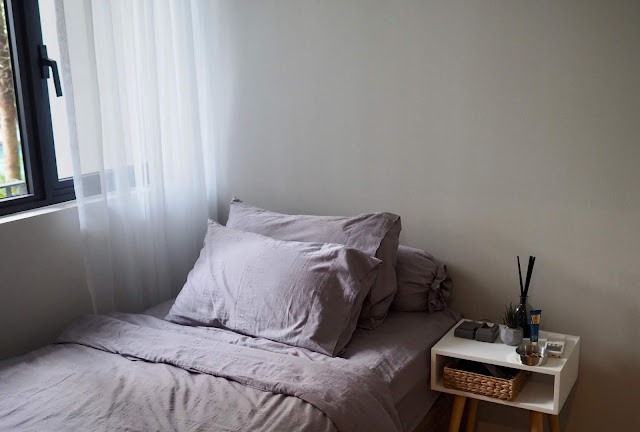 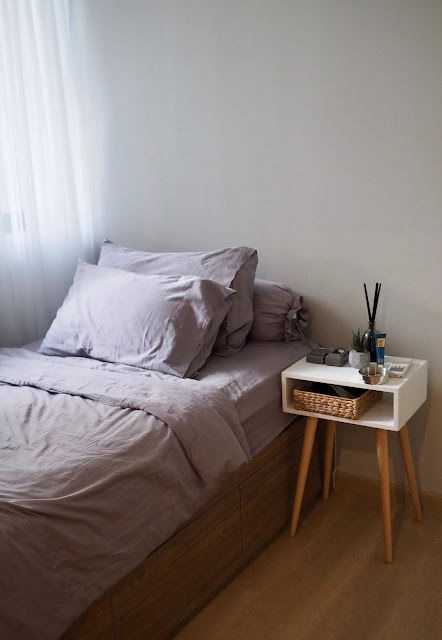 We fitted in a super-single bed frame for the guest as it was much smaller than the master. Also, because I wanted a bit more storage space, Jason cleverly included extra drawers below the bed frame so I can store some clothes of my own. We also managed to add more storage and a full length mirror at the corner of the guest room so it doubles up as my "wardrobe room" when I don't have guests over. Using a similar tone of laminate from Keminates, both guest room and master gives off the same white clean minimalist vibes which I have gotten tons of praises on!

If you are looking to renovate your house or are in the midst of settling your new crib, I cannot recommend Icon Interior Design more! They are also celebrating their 10th anniversary on 12 & 13 October 2019 where you'll get 10% off all packages! And that's a lot of money by the way, considering that renovations don't come cheap! Head on over to their Facebook page or Instagram to find more out!

For more information on the Icon Interior's 10th Anniversary promotion, visit them at www.instagram.com/iconinteriordesign, www.iconinterior.com.sg or ring them at +65 8822 3441!